A Brexit Compromise? Attitudes towards a Closer Relationship with the EU

In two blogs earlier this month (see here and here), we argued that (i) over the last year there has been a marked swing in favour of rejoining the EU, and  (ii) that the principal reason for this was a decline in the proportion of Leave voters who would now vote to stay out of the EU, a decline that has been occasioned by an increase in the perception that being outside the EU is proving economically disadvantageous. However, perhaps not everyone who says that they would now vote to rejoin the EU would necessarily hold that view if the UK had a closer relationship with the EU than it has at present?  And maybe not everyone who says they would vote to stay outside the EU is necessarily opposed to the UK having a closer relationship with its near neighbour? In short, might a modified Brexit arrangement, a prospect that has recently been dubbed a ‘Swiss-style’ relationship, provide the basis for a compromise that appeals to both Remain and Leave supporters and thus a clear majority of the public?

It is certainly the case that when voters are presented with a range of options regarding Britain’s relationship with the EU, support for rejoining is markedly lower than the 46% recorded on average (before Don’t Knows are left aside) in the most recent polling of the binary choice between ‘join’ versus ‘stay out’. For example, over the last couple of years Opinium have regularly asked voters whether Britain should rejoin the EU, have a closer relationship while remaining outside, keep the same relationship as now, or seek a more distant one. In their most recent poll in December, just 34% said that Britain should rejoin, while 25% backed a closer relationship, 15% the current relationship, and 18% a more distant one. Even among those who voted Remain in 2016, only 61% pick rejoining. It might also be noted that the pattern of response to this question has not changed dramatically since the UK left the single market, though support for rejoining is a little higher now than it has been for most of the last two years.

Meanwhile, in November, Public First invited their respondents to pick one of a wide range of options that, apart from rejoining, included being outside the EU but part of the single market and/or the customs union, together with renegotiating the current deal but staying out of the single market and customs union, keeping the current relationship, and reducing our links with the EU.  Just 30% selected rejoining, while 21% picked one of the options involving single market and/or customs union membership. Meanwhile, 14% backed a renegotiation of the Brexit deal, 10% keeping the current relationship as is, and 9% reducing links with the EU. The picture was much the same when Public First also asked whether or not Brexit had been a mistake, and what, if anything should be done about it. Just 29% said that we should rejoin because Brexit had been a mistake. 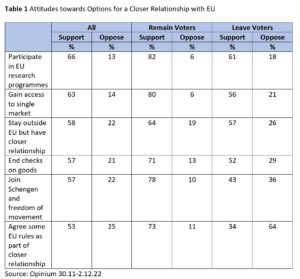 Opinium’s results echo those of Redfield & Wilton on which we reported last month. In that poll respondents were presented with a number of ways in which the UK might be more closely linked to the single market in return for accepting some of the obligations of membership.  No more than one in six opposed any of the options while support stood at just below a half or more. Equally, Public First found that around a half think it is important for the UK to rejoin the single market and the customs union, while less than one in five are opposed. Meanwhile, YouGov reported that 42% support being outside the EU but rejoining the single market, while only 24% are opposed, and that 46% think we should follow more EU rules to reduce trade barriers, while 33% are against doing so.

However, there are some important subtleties in Table 1. First, voters are more likely to support propositions that focus on the potential benefit to the UK rather than those that refer to the obligations that a closer relationship might entail. In particular, while 63% are in favour of ‘gaining access to the European single market’ only 53% back ‘agreeing to some EU legislation as part of a wider deal on a closer relationship’. Moreover, the contrast in the pattern of response to these two questions is particularly sharp among Leave voters, just 34% of whom are willing to agree to some EU rules whereas 56% favour gaining access to the single market. (And we might note too the relative lack of enthusiasm among Leave voters for joining Schengen and freedom of movement.) This contrast is also apparent in YouGov’s polling, in which 37% of 2016 Leave voters said they favoured rejoining the single market while remaining outside the EU (slightly more than the 35% who were opposed), whereas only 18% were willing to follow more EU rules in order to facilitate trade. As was also apparent in the polling from Redfield & Wilton, among many Leave voters, there is still an aversion to following rules from Brussels.

Second, while Remain supporters are, for the most part, more likely than Leave voters to support the propositions in Table 1, the gap between the two is smaller in the case of being outside the EU while having a closer relationship. Indeed, among Remain voters this was the least popular of the options with which respondents were presented by Opinium. A similar pattern is also evident in YouGov’s polling, in which, in contrast to the position among Leave voters, support among Remain supporters for following EU rules was higher (78% were in favour) than it was for rejoining the single market but being outside the EU (56%). Evidently there are some Remain voters who would not be satisfied with anything less than rejoining the EU.

Thus, the space in which a compromise might be found is probably somewhat narrower than the headline figures in the polls suggest. True, most Remain voters would appear to regard any move towards a closer relationship with the EU as an improvement on the status quo, albeit many would still prefer above all to rejoin. However, while there is some support for a closer relationship among some Leave voters, for the most part that support tends to fall short of a willingness to align with EU rules. That is also reflected in Public First’s evidence that only 20% of 2016 Leave voters back either rejoining the EU or some combination of single market or customs union membership.

Rather, what is most striking about the mood among Leave voters is how fragmented it now appears. For example, according to Opinium, 35% would like to rejoin or have a closer relationship with the EU, 26% would keep the existing relationship, while 30% would like a more distant one. Polling from Savanta and Public First paints a not dissimilar picture. While the willingness of some Leave voters to seek a closer relationship with the EU might open up some prospect of finding some common ground between Leave and Remain voters, finding a compromise that would satisfy a majority in both camps still looks hard to achieve.

The Brexit Vote: Right or Wrong? What should Brexit mean?

One thought on “A Brexit Compromise? Attitudes towards a Closer Relationship with the EU”