Posted on 8 November 2019 by John Curtice

The election on December 12th has been occasioned by the difficulties and divisions that have arisen in the House of Commons as it has endeavoured to deal with the UK’s proposed withdrawal from the EU during the last twelve months. The Prime Minister is seeking a mandate to ‘get Brexit done’, while the opposition parties are opposed to the deal that he has struck with the EU – in many instances because they do not want Brexit to happen at all.

However, an election is never about a single issue. The parties disagree about a wide range of domestic policies also.  So, to what extent will people’s attitudes towards Brexit be reflected in the way that they vote in the election? And will how they vote be more or less of a reflection  of those views than was the case at the general election two years ago?

The simplest way of addressing this question is to examine how those who voted Remain in 2016 and those who backed Leave say they will vote in December as reported by those polls conducted since the election was called. This we do in Table 1, which is based on the average of the most recent figures obtained by the eight companies who have polled voting intentions since the latter half of last week. At the same time, we also show how the pattern compares with the position in 2017, using data from the British Election Study internet panel. 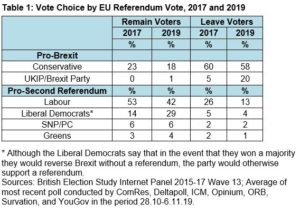 Remain and Leave voters are minded to vote very differently. Around four in five (78%) of those who supported Leave are currently proposing to vote for either the Conservatives or the Brexit Party. In contrast, around four in five (81%) of those who backed Remain say they support one of the parties in favour of another referendum. It looks as though the divide of three years ago will in many respects be played out again on December 12. Only a minority of voters – just one in five – are likely to opt for parties whose views on Brexit are seemingly at odds with how they voted three years ago.

However, the extent to which one party is favoured above the others differs markedly between the two sets of voters. On the Leave side, support is concentrated in the ranks of the Conservative party – nearly three in five (58%) Leave supporters say they will vote that way. In contrast, on the Remain side, support is more evenly spread across different parties, with even the most popular party, Labour, currently backed by only just over two in five (42%).

This matters. Among voters as a whole, support for the two pro-Brexit parties combined (48%), is almost exactly the same as that for the five parties that support a second referendum (47%). It is the concentration of Leave support in favour of the Conservatives that primarily accounts for the fact that the party currently enjoys an average ten-point lead.

But how does the position at the beginning of this election campaign compare with what happened in 2017? Of course, we should bear in mind that the positions of the parties were not the same then as they are now. For example, although Labour were saying that they would negotiate a Brexit deal that would be ‘softer’ than the one that Theresa May appeared to have in mind, the party was not at that point in favour of another ballot. So, perhaps we should not be surprised if people’s views on Brexit were not as strongly related to how they voted in 2017 as they appear to be now.

This, indeed, proves to be the case. True, at 76%, the proportion of Remain voters who in 2017 supported one of the parties that now favours a second referendum is only a little lower than the equivalent proportion now (81%). But, at 65%, the proportion of Leave supporters who backed either the Conservatives or UKIP was markedly lower than the 78% support for the Conservatives or the Brexit Party that pertains in the current polls.

It looks then as though how people vote at this election will reflect the division on the principle of Brexit to an even greater extent than did the 2017 contest. That this is seemingly set to be the case also becomes apparent if we examine the dynamics of party support, that is, the pattern of switching between 2017 and now. This is done in Table 2, which shows the current vote choice of both those who voted for the Conservatives and those who backed Labour in 2017 broken down by how they voted in the EU referendum.

The first point to note is that those whose views on Brexit would appear to be at odds with those of the party they backed in 2017 are less likely to be loyal to their choice of two years ago. No less than 84% of those 2017 Conservatives who backed Leave in 2016 now say that they will vote Conservative again, compared with just 63% of those 2017 Conservative voters who supported Remain. Equally, while 74% of those who voted Labour in 2017 who backed Remain state they will back the party again, only 57% of those who supported Leave are now of the same view.

Meanwhile, those who have now switched parties have for the most part moved towards a party whose views on Brexit would appear to reflect better how they voted in 2016. Over one in four (27%) of those 2017 Conservatives who voted Remain are now backing the Liberal Democrats, while one in seven (14%) of those who voted Leave are now supporters of the Brexit Party. At the same time, around one in five 2017 Labour voters (21%) who backed Remain have switched to the Liberal Democrats, while nearly two in five (37%) are now opting for either the Conservatives or the Brexit Party – in roughly equal numbers, indicating that the suggestion that Labour Leave voters are reluctant to switch to the Conservatives may in fact be wide of the mark.

Once again it looks as though Brexit is set to shape – and reshape – party loyalties.

15 thoughts on “A Brexit Election?”