A Brexit Election After All?

This was meant to be the Brexit election. In calling tomorrow’s ballot the Prime Minister indicated that she was seeking to strengthen her hand in the Brexit negotiations by securing a significantly larger majority than her party had in the last parliament, thereby providing her with some insulation against the risk that the House of Commons might fail to back her approach at some point during the course of the next two years. In the event, the election campaign has been about much more than Brexit, not least as a result of the tragic terrorist incidents in London and Manchester.

The answer to the first question is very simple. It would seem that the campaign has changed few minds on the merits of Brexit or on what the UK government’s priorities should be in the forthcoming negotiations. YouGov continue to find that slightly more people think that the decision to leave the EU is right rather than wrong. Polls that have asked people directly how they would vote in another EU referendum have found that voters continue to be evenly divided, albeit with usually slightly more saying they would vote Leave rather than Remain. Equally, Opinium find that the country remains more or less evenly split down the middle on the relative merits of staying in the single market and ending freedom of movement.

Still, perhaps a lack of movement about the merits of leaving is not surprising. After all, both the Conservatives and Labour have said that they accept that the UK is leaving the EU and that the argument now is about what the terms of our withdrawal should be.

However, this has not stopped the parties from adopting somewhat different stances on the shape of Brexit. The Conservatives wish to end freedom of movement and reduce immigration to no more than tens of thousands a year. Labour has simply said that immigration would probably fall under its watch and has emphasised instead the need to preserve the labour market protections currently provided by EU membership. The Liberal Democrats, meanwhile, have said there should be another referendum on the terms of Brexit before we leave the EU, while UKIP have argued that only a vote for them can ensure that the next government does not give too much away in the negotiations.  Given these differences we might wonder whether the parties have induced Remain and Leave voters to swing differently during the course of the election.

The answer appears to be that they have. Remain and Leave voters are now somewhat more divergent in their relative likelihood of voting Conservative or Labour than they were before the election was called.

This trend is illustrated in the following two tables, which show how the average level of support for the parties amongst those who twelve months ago voted Remain and those who voted Leave has evolved since the election was called. We focus on data from YouGov and ICM because those are the two companies that have polled most often during the course of the election campaign. 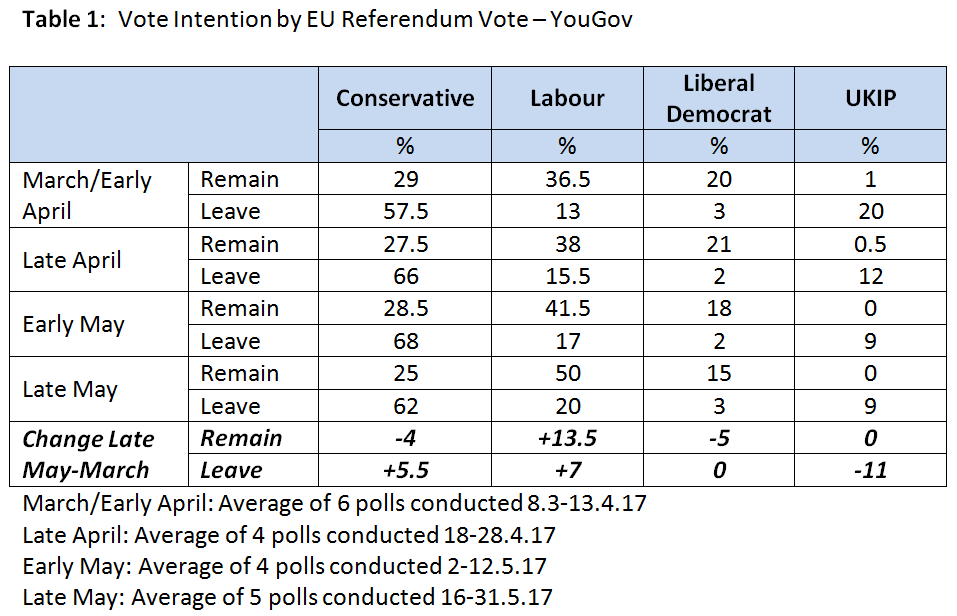 Let us look at the YouGov data (see Table 1) first. It will be seen that even before the election was called, a clear majority of Leave voters said they would vote Conservative, while a plurality of Remain voters indicated that they would vote Labour. Even so, both those parties still had substantial bodies of supporters amongst both Remain and Leave voters, unlike the Liberal Democrats and UKIP whose support was confined almost entirely to Remain and Leave voters respectively.

No sooner was the election called, however, and support for the Conservatives amongst Leave voters leapt from 57.5% to 66%, while support for UKIP fell away dramatically from 20% to 12%.  In short, as we have noted before, no sooner had the election been called and a significant proportion of UKIP voters immediately decided that the best way of promoting the kind of Brexit they wanted was to support the Conservatives rather than back UKIP. In contrast, the pattern of party support barely changed at all amongst Remain voters at this time.

However, in more recent weeks the pattern of support amongst Remain voters has changed too. Support for Labour amongst this group has increased by no less than 13.5 points over the course of the campaign, while Liberal Democrat support has fallen away somewhat. True, in contrast to the move to the Conservatives amongst Leave voters early in the campaign it is not just Remain voters who have swung to Labour; so too have Leave voters. However, according to YouGov, the increase in Labour support amongst Leave voters has occurred at only half the rate that it has done amongst backers of Remain.

So, the movement to Labour during the election campaign is less obviously a decision simply motivated by attitudes towards Brexit. Even so, a somewhat higher proportion of Labour’s vote tomorrow looks as though it will come from Remain supporters than looked likely to be the case a few weeks ago. 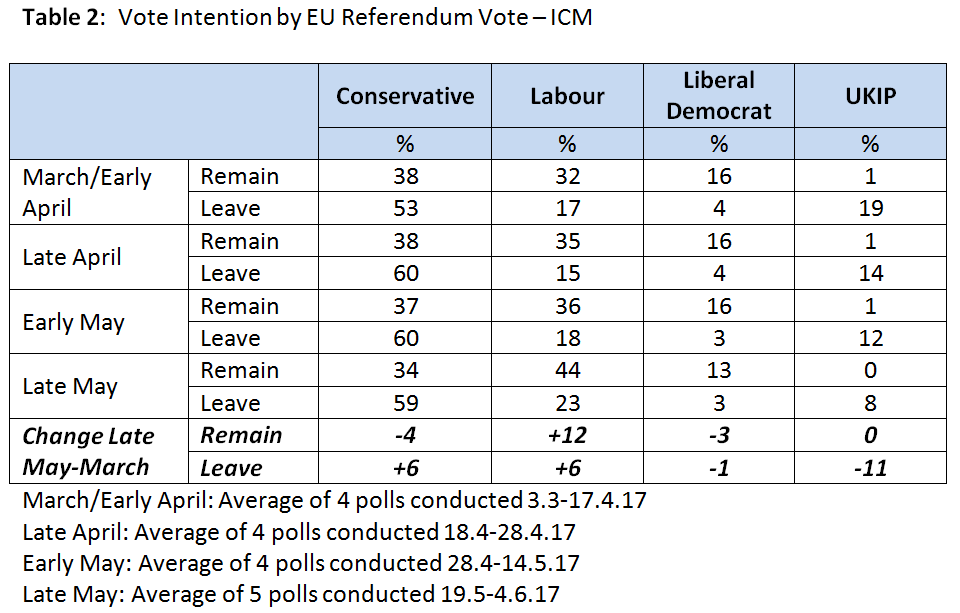 In one respect ICM’s data (see Table 2) tell a slightly different story. They suggest that the difference between Remain and Leave voters in their propensity to back the Conservatives or Labour was less marked than suggested by YouGov from the beginning and this continues to be the case now – a sign, perhaps, that the difference between the two pollsters in their estimates of the size of the Conservative lead over Labour amongst voters as a whole is not simply a consequence of differences in the expectations that the two companies have of the level of turnout amongst younger voters. However, the changes in the level of support for the parties across the campaign are very similar in ICM’s data to those registered by YouGov. Conservative support is reckoned to have increased amongst Leave voters and to have fallen amongst Remain supporters. Labour’s vote, meanwhile, has increased twice as much amongst Remain voters as amongst Leave supporters.

At the beginning of this campaign there was much speculation about whether Brexit would realign Britain’s party politics. Would the Liberal Democrats’ stance enable the party to attract Remain voters away from Conservative and Labour, while UKIP consolidated the Leave vote? That, obviously, has not happened, at all. Rather this election has seemingly marked a return to two-party politics, at least so far as England and Wales are concerned. But at the same time, the contest has served somewhat to polarise the pattern of support for the Conservatives and Labour, and thus it would seem likely to encourage them in the new parliament to continue to adopt rather different attitudes towards the kind of deal that Britain should seek from the EU. Meanwhile, should Theresa May not achieve her objective of winning a large majority, she will have even more reason now than she had before to be mindful of her party’s heavy reliance in the ballot box on those who voted to Leave.

The Brexit process The Brexit Vote: Right or Wrong? The EU Referendum What should Brexit mean?