Another Look at Attitudes towards Extending the Transition

Slowly, the issue of Brexit is beginning to attract attention once more. The UK and the EU agree that the negotiations between them on a future trade relationship have not made much progress so far, albeit they disagree as to where the responsibility for that position lies. Meanwhile, the deadline for agreeing an extension to the transition process – the end of June – is beginning to loom rather large.

Consequently, claim and counterclaim are now being exchanged about whether an extension should be sought and agreed, not least because of the impact of coronavirus on both the talks themselves and the economies of both the UK and the EU. These inevitably include claims about what the public want, and in particular many an assertion that voters now back delaying the end of the transition.

A month ago, we reported that initial polling on the subject provided evidence that supported that claim. However, we also noted that, while divided on the subject, the balance of opinion among those voters at whom the government’s Brexit policy is primarily targeted – Leave supporters and those who backed the Conservatives in December- was tilted, albeit relatively narrowly, against the idea of an extension. Consequently, if the government were to seek an extension the Prime Minister would seemingly be running the risk of upsetting a significant proportion of those who gave him his parliamentary majority.

Three further readings in the last month have underlined this picture – but also suggest that the level of opposition to extending the transition may depend on how the issue is addressed in a poll. Details of these three readings, together with those of earlier polls are shown in Table 1. 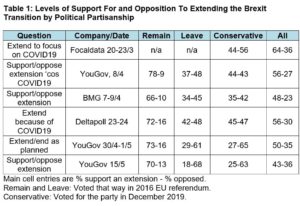 As the far right-hand column shows, every single poll, including the three most recent, has reported that among voters as a whole, more are in favour of an extension than are against. (A fourth poll by ComRes found that 40% were in favour of an extension, while 35% wanted to keep the existing deadline, but it muddied the waters somewhat by also offering an option to bring the deadline forward, an option that was backed by 8%.) All also show that there is little doubt where most Remain voters stand on the issue. At least two-thirds and maybe as many as three-quarters are in favour of an extension. But then many of them will still be opposed to the principle of leaving the EU in the first place.

However, some of the more recent polling suggests that the position among Leave voters and those who supported the Conservatives in 2019 could be even more different from that among Remain voters than previous polling suggested. While a poll from Deltapoll once again reported only narrow majorities against an extension among these two groups, two differently worded questions that were both administered by YouGov evinced substantial majorities against.

Of particular interest was the most recent YouGov poll of 15 May. The wording of this question was exactly the same as that administered by the company on 8 April, except that the following piece of informational background was excluded: ‘However, negotiations have now been delayed because of the coronavirus outbreak.’ This omission seems to have made a considerable difference to the views expressed by Leave voters, among whom the level of opposition was now as much as 20 points higher than previously.

The other question asked more recently by YouGov that also reported a higher level of opposition among Leave voters than other polls also did not make any reference to the pandemic as a possible reason as to why the transition should be extended. Instead, it made reference to the possibility that doing so might allow for more time to conclude trade negotiations with the EU. Here, perhaps, it needs to be borne in mind that many a Leave voter is not necessarily concerned to ensure that a trade deal is achieved. According to polls by Kantar in March and April, rather more Leave voters (38%) would prefer to leave under WTO terms with no trade deal than would like a trade deal (28%), while Conservative voters too are divided as to which outcome they would prefer.

Both exercises stand in contrast to the recent polling undertaken by Deltapoll, which like Focaldata and the earlier YouGov polling, made reference to coronavirus as a reason for extending. And while this is not true of BMG’s polling, its question about the transition was asked in the midst of a myriad of questions about the pandemic, thereby perhaps helping ensure that the issue was at the front of respondents’ minds.

Some Leave voters and some Conservative supporters may well have doubts about the wisdom carrying on with Brexit regardless of the pandemic. But, unsurprisingly perhaps, most would apparently still prefer for the UK to have disentangled itself fully from the EU by the end of the year. And, whatever the rest of the electorate may think, that is not a mood the government will find it easy to ignore.

4 thoughts on “Another Look at Attitudes towards Extending the Transition”