Are Voters Changing Their Minds About Brexit?

The Brexit negotiations are about to enter a critical phase. Between now and October the UK government and the EU have to agree an outline of what their relationship will be once the transition/implementation phase ends in December 2020. In the UK, that agreement will need to secure the approval of a House of Commons where a divided government does not have an overall majority. This has led, perhaps inevitably, to increasingly intense speculation about whether Brexit is bound to happen or whether a political spanner might yet be put in the withdrawal works.

This speculation focuses, amongst other things, on two inter-related issues. First, are most voters still in favour of leaving the EU? After all, the Leave majority in June 2016 was no more than a narrow one and would take little to overturn. Second, is there (growing) support for another referendum on Brexit once the negotiations with the EU have concluded? While these questions are inevitably asked more often by those opposed to Brexit, Nigel Farage’s suggestion that perhaps there should be another referendum indicates that these questions are also now in the minds of some Leave supporters. But, with many a claim and counterclaim about exactly where public opinion now lies, what answers to the two questions can we draw from a dispassionate look at the polls?

Questions about how people would vote in another referendum have not been asked particularly frequently. Moreover, even when the issue has been addressed, the polls have not necessarily posed the question that appeared on the ballot paper in June 2016.  However, BMG have posed the referendum question on a regular monthly basis since the autumn of 2016. And, as we can see, up until May 2017, Remain had never been ahead of Leave. However, subsequently, Remain have never been behind. That would seem to suggest there might well have been a small swing in favour of Remain.

A similar impression is gained if we look at all of the polls (undertaken by a variety of companies) that have asked something other than an exact replication of the referendum question (and, in so doing, for clarity’s sake we leave aside the Don’t Knows). During the general election and immediately thereafter, these polls all put Remain ahead. But since then Remain has nearly always been in the lead. A not dissimilar turning of the tide shortly after the general election is also evident in YouGov’s regular Eurotracker series.

So, there appears to be consistent evidence across a number of poll series that what until the middle of last year was still a small majority in favour of leaving the EU has now become a small majority for remaining. That said, we have to sound the warning that, with the polls as close as they mostly are, nobody can be sure that there would be a different outcome if another referendum were held now. After all, most (though not all) of the polls conducted immediately before the EU referendum had Remain narrowly ahead, yet in the event it was Leave that prevailed.

But, more importantly, if we look underneath the bonnet at the ebb and flow of voting intentions since the EU referendum, there is relatively little evidence that many Leave voters have jumped ship. Table 1 below is based on the detailed figures from four recent polls and surveys (including the NatCen Panel) that not only asked people how they would vote in a EU referendum held now, but also how – and whether – they voted in June 2016.

Those who voted Leave are now a little less likely than those who voted Remain to say that they would vote the same way again. However, the difference – four points – is a small one. Moreover, Leave voters are barely any more likely than Remain supporters to say they would now vote differently from how they did in June 2016. Instead, they are slightly more likely to say they are not sure which way they would vote a second time around, or else that they might not make it to the polls at all. Where Remain does gain ground is amongst those (disproportionately younger voters) who did not vote last time. In short, it looks as though the outcome of another referendum could well depend on which side’s supporters proved more likely to turn out, and that must be regarded as a highly uncertain foundation on which to rest any hopes that Remain supporters may have that the June 2016 verdict can be overturned.

But do voters want a second bite at the cherry in the first place? Much excitement was caused at the weekend by an ICM poll for The Guardian that suggested there was now a clear majority in favour of holding another referendum. But, in truth, respondents’ views on this subject depend heavily on how the issue is put to them. This should not surprise us for, after all, there is more than one possible form that a second ballot could take. There is no reason why voters should hold the same opinion about a referendum where the choice is, on the one hand, between accepting the deal that is agreed between the UK and the EU and, on the other hand, leaving the EU without any deal at all, as they do about one where the choice is between accepting the deal and reversing Brexit. Meanwhile, we can also conceive of a referendum where the alternative to acceptance of the deal was renegotiating it, while we might imagine a referendum which was simply a rerun of the ballot in June 2016 without any reference to a deal at all.

The importance of these distinctions were made apparent by polling recently undertaken by Lord Ashcroft. He administered four different versions of a ‘second referendum’ question and, as Table 2 shows, each of them secured rather different patterns of response (for full details of the questions and responses see here).  The balance of opinion was relatively firmly weighted against an unspecified second referendum. It was also against a ballot that was essentially described as a rerun of the last referendum without reference to the outcome of the Brexit negotiations. In contrast, opinion was relatively evenly divided on a post-deal referendum where the choice was between the negotiated deal and staying in the EU, while there was actually a balance in favour of a ballot on leaving on the negotiated terms or without any deal – though in this instance many voters (30%) were undecided about the merits of being presented with what might regarded as Hobson’s Choice.

Table 2: How Support for Different Kinds of Second Referendum Varies 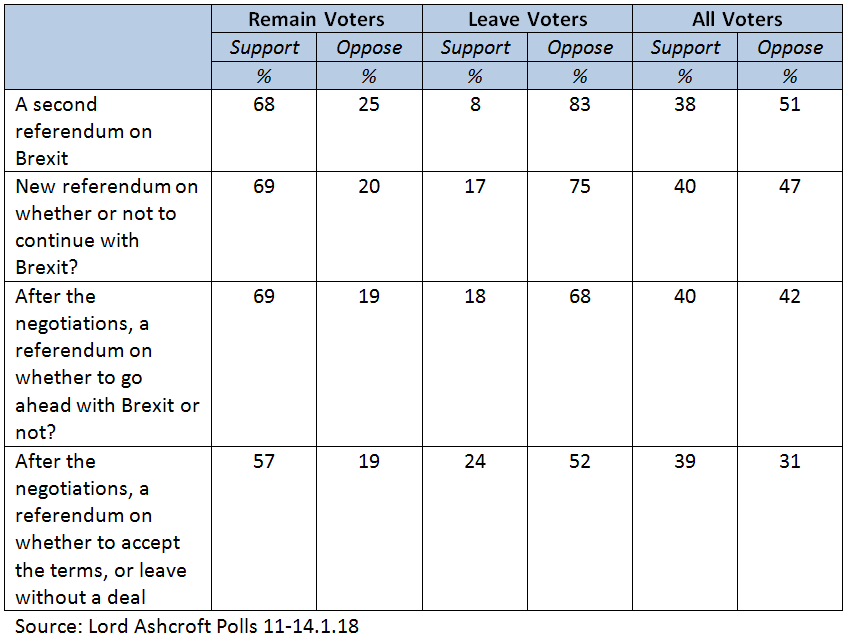 What is also worth noting that is that most of the variation in the pattern of responses to these questions is occasioned by the answers given by Leave voters, who are much more opposed to an unspecified second referendum (83%) than they are to a choice between a deal or no deal (52%).  In contrast, Remain voters are more consistent in their answers, though they find the prospect of a deal versus no deal ballot somewhat less attractive. Neither of these patterns should come as much of a surprise. But they are a reminder that we should not assume that a poll that shows relatively high levels of support for holding another referendum is necessarily a reflection of greater enthusiasm for the idea amongst Remain voters.

This point is reinforced when we look at the divergent results that have been produced by other polling companies that have delved into this subject. On the one hand, both Opinium and YouGov have consistently reported that the opponents of another ballot outnumber supporters. In contrast, on the more limited occasions that Survation have addressed the issue, they have more often than not found the balance of opinion to be in the opposite direction, as did ICM in its question (asked for the first time) in its poll for The Guardian last week. As Table 3 indicates, it is again Leave voters whose answers appear to be more sensitive to how the issue is approached. There is no more than a seven-point difference in the levels of support and opposition registered to any of these questions amongst Remain voters, whereas there is as much as a 24-point difference in the level of opposition registered by Leave voters.

The variation in the wording of the questions asked by the four companies can be summarised as follows:

Opinium: Post-negotiations, a second referendum in which ‘voters can choose between leaving under the terms negotiated or remaining in the EU after all?’

YouGov: Post-negotiations, ‘a referendum to accept or reject [the terms]?’

ICM: Agree/Disagree that ‘the public should have the chance to take a final decision on whether or not to leave the EU in another referendum’

Survation: ‘holding a referendum asking the public if they will accept or reject the deal’

Two of these questions, those asked by YouGov and Survation, ask respondents whether or not they want a vote on the outcome of the negotiations, without specifying what the implications of rejecting the deal might be. In contrast, Opinium and ICM pose the prospect of a referendum on staying in the EU versus leaving. But given that these two pairs of questions produce rather different answers, these features cannot adequately explain the divergence between them. What distinguishes Survation’s question from YouGov’s is a more ‘populist’ tone, that is, it emphasises the ability of ‘the public’ to make a decision rather than simply referring to holding ‘a referendum’. Similarly, while Opinium simply refer to voters being able to ‘choose’, ICM pose the prospect of voters making the ‘final decision’. In short, it looks as though the way a hypothetical second referendum itself is described matters as well as what a no vote in that referendum is stated or implied to mean.

But leaving aside the subtleties of how the question of another referendum is posed, is there any consistent evidence that support for having another referendum has increased? Neither of the two most substantial time series we have, from YouGov and Opinium, provides much evidence in support of this proposition. In YouGov’s case, there is some indication that perhaps opinion has moved very slightly in favour of a second ballot; their last two polls put support at 33% and 36%, whereas in April it stood in two polls at 31%. But in the case of Opinium, whose time series is the longest of all, it is very difficult to discern any evidence of a long-term trend at all. Detecting a shift in public opinion on Brexit – in either direction – is, it seems, very hard to do.

The Brexit process The Brexit Vote: Right or Wrong?