One key feature of the 2017 election was that the Conservatives gained ground among those who voted Leave while the party lost support among those who backed Remain.  At the same time, Labour advanced more strongly among Remain voters than Leave supporters. But what happened in the 2019 election? Did those trends continue yet further or were they in any way reversed?

The first of the evidence necessary to address this question is now available, thanks to polls conducted by Lord Ashcroft and YouGov, both of whom also undertook similar exercises after the 2017 election. Lord Ashcroft interviewed online between 11 and 12 December just over 13,000 people who said they had cast a ballot. The results can be compared with those of a similar exercise from the same stable that interviewed 14,000 voters between 6 and 9 June 2017. Meanwhile, YouGov interviewed nearly 42,000 people between 13 and 16 December, the results of which can be compared with a poll of over 52,000 people conducted by the company between 9 and 13 June 2017.

The two pairs of polls report the vote choice in both 2017 and 2019 of those who voted Remain in 2016 and those who backed Leave. In both cases, too, the 2017 poll also gives information on how Remain and Leave voters behaved in 2015, a year before the EU referendum. This means that in Table 1 we are able to show the trend over the last three elections in the vote choices of Remain and Leave supporters. 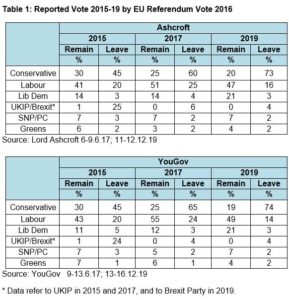 Both poll series show much the same pattern. Support for the Conservatives increased among Leave voters and fell among Remain voters between 2017 and 2019, and in so doing continued the trend that had already been in evidence between 2015 and 2017.  As a result, for every one Remain voter who supported the Conservatives in 2019 there were nearly four Leave supporters who did so.  In 2015, the equivalent ratio was just one to 1.5. During the last four years, the electoral base of the Conservative party has been transformed from one that, on balance, was moderately Eurosceptic to one that is now predominantly so.  As a result, the foundations of the ‘People’s Government’ the party has now formed rest very heavily on that section of the public that voted Leave.

In Labour’s case, the refashioning of the party’s vote has not been so dramatic but has still been substantial. It fell between 2017 and 2019 among both Remain and Leave voters, but much more so among those who voted Leave. In contrast, the party’s vote had increased among both groups between 2015 and 2017, but more so among Remain than Leave voters. As a result, for every one Leave voter whose support the party won in 2019 there were around three Remain supporters backing the party. In 2015, the equivalent ratio was more like one to two. One of the legacies of Jeremy Corbyn’s tenure as leader is a Labour vote that has become markedly more Europhile.

The Liberal Democrat vote has become more Europhile too. After what in 2017 was largely a repeat of the party’s performance two years previously, all of the increase in the party’s support between 2017 and 2019 was secured among those who voted Remain. As a result, what has always been Britain’s most Europhile party in terms of its policy position is now the most Europhile party in the country in respect of the electoral support it enjoys too.

The Brexit process has, then, clearly had a significant impact on the character of the support for all three of Britain’s largest political parties (in terms of votes won) at the 2019 election. That in turn means that how people voted was more likely to reflect which side they backed in the 2016 referendum.

In the case of Remain voters, the change was a marginal one. According to Lord Ashcroft, in 2019 79% of Remain voters supported a party that was in favour of holding a second referendum, up from the 75% who supported one of those parties in 2017 (though, at that point, not all of those parties were in favour of a second ballot). YouGov put the figures at 78% and 81% respectively.

However, in the case of Leave supporters, the increase in the extent to which they voted for a pro-Leave party is very marked. According to Lord Ashcroft, 77% of Leave voters supported either the Conservatives or the Brexit Party this time around, whereas just two-thirds (66%) backed either the Conservatives or UKIP in 2017. Similarly, the equivalent figures for YouGov are 69% and 78% respectively.

While not everyone’s vote was influenced by their views about Brexit, the Brexit impasse of the last two years and the circumstances under which the 2019 election was called do seem to have ensured that the issue was especially high on voters’ agendas when they decided how to mark their ballot papers.

Yet, crucially, Remain and Leave voters expressed their views very differently – and it is this difference and the impact it had on the operation of the electoral system, not the balance of opinion of Brexit, that has been decisive in ensuring that Britain now has a pro-Brexit government that should be able to deliver Britain’s withdrawal from the EU by the end of January.

At 47%, the total vote cast for the two pro-Brexit parties was rather less than the 52% that went to parties in favour of some kind of second EU referendum – a balance in line with the small lead for Remain in our poll of polls of vote intentions for a second Brexit referendum. However, as we have seen, Leave voters mostly plumped for the Conservatives, while Remain voters scattered their favours between Labour and the Liberal Democrats – and, north of the border, the SNP. It is that difference that delivered the Conservatives a 12-point lead over Labour that, under the ‘first-past-the-post’ electoral system was more than enough to give Boris Johnson a handsome overall parliamentary majority. It now remains to be seen what kind of Brexit he manages to deliver.