Competing Explanations or Two Sides of The Same Coin? Voters’ Evaluations of The Impact of COVID-19 and Brexit

Posted on 7 December 2021 by John Curtice

Within weeks of the UK leaving the European Union at the end of January 2020 Britain found itself, like the rest of the world, having to cope with the most serious public health crisis in a century. As a result, Brexit fell off the media agenda while whatever immediate impact Brexit might be having on life in Britain was overwhelmed by the manifest impact of COVID-19 on the country’s social and economic life. Forming any kind of judgement on the immediate impact of Brexit was made very difficult for voters.

In the meantime, the UK has left the EU single market and customs union while, with most public health restrictions now removed, economic activity has almost returned to pre-pandemic levels. Meanwhile the last few months have seen media headlines about a petrol shortage and gaps on supermarket shelves, difficulties that have been attributed to a lack of qualified lorry drivers, together with a marked uptick in inflation.

That, in turn has occasioned a debate about whether these difficulties are symptomatic of the economic consequences of the pandemic or the result of disruption to the flow of goods and labour occasioned by Brexit. Supporters of Brexit have seemingly been minded to seize on the former explanation, while opponents have seemed ready to lay the blame at Brexit’s door.

But is this how voters have reacted? In the polling undertaken by Redfield & Wilton Strategies for UK in a Changing Europe released today, voters were asked whether they thought Brexit has had a positive or a negative impact on 13 aspects of economic life in Britain.

They were then asked whether they thought coronavirus has had a positive or a negative impact on those same 13 aspects. Voters were thus being given the opportunity, if they wished, to distinguish between the impact of these two major developments on British life.

Table 1 summarises the results of the poll by showing for each of the aspects of economic life that it covered, the proportion who said that Brexit has had a positive impact and those who have said it has had a negative impact, together with the same information for coronavirus.

It seems that the recent media headlines have hit home. Over a half of voters believe that Brexit has had a negative impact on both the supply of food and other goods and on the cost of living. No other aspect of economic life comes close to being so widely regarded as having been negatively impacted by Brexit, though only in one instance, wages, do those who believe leaving the EU has had a positive impact outnumber (just) those who believe it is has had a negative impact. 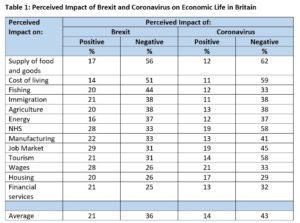 Yet if voters blame Brexit for the supply shortages and inflation, they blame the pandemic too. Around three in five think the pandemic has had a negative effect. Indeed, there is often a remarkable similarity of judgement about the impact of the two developments. Only in the case of the NHS and tourism, where also nearly three in five think that coronavirus has had a negative impact, together with, to a lesser extent, manufacturing, is the balance of positive and negative evaluations markedly different from that for Brexit.

Among Leave voters, in contrast, the equivalent figures are 18% and 36% respectively. So, while Leave voters do draw a distinction between the impact of Brexit and that of coronavirus, the contrast is not as sharp as we might have anticipated.

Most likely the explanation for these patterns lies in voters’ divergent perceptions of how well the government has handled the pandemic.  Most Leave voters voted for the Conservatives in 2019, while most Remain supporters did not. And while, according to Redfield & Wilton’s most recent poll on the subject, 69% of those who voted Conservative in 2019 approve of how the government have handled the pandemic, only 24% of those who voted for one of the opposition parties take the same view. It looks as though voters who think that the government has handled the pandemic well are less likely to believe that it has had a negative impact on the country – and that this accounts for the relative reluctance of Leave voters to say that the pandemic has had a negative impact on the country.

Brexit and coronavirus are not, then, two separate battlegrounds in the minds of voters. Rather, voters are judging the government’s performance on both in parallel.  Instead of pointing the finger of blame for the state of the country’s economic life at Brexit rather than coronavirus, Remain supporters are more inclined to the view that both Brexit and coronavirus have damaged Britain. Indeed, it is often the same individuals who express both points of view. Leave voters, in contrast, are more likely to feel that the government has mitigated the worst consequences of the public health crisis while, for the most part, they are willing to give Brexit the benefit of the doubt. Voters are looking at how well the government is handling both Brexit and coronavirus, not making judgements about the relative importance of the two.

Perceived consequences of leaving the EU The economic debate