Delivering Brexit – How Well Is Boris Thought To Be Doing?

It is now just over a year since Boris Johnson was elected Leader of the Conservative Party and became Prime Minister. The issue of Brexit was a key component of his leadership campaign, with him promising to ‘Get Brexit done’ and have the UK formally leave the EU by 31st October. Whether and how Brexit was delivered dominated the media and political agenda of Mr Johnson’s first year – until the coronavirus pandemic began in March. But, one year on, what have the British people made of the government’s performance on Brexit?

During the year, both YouGov and Kantar have regularly asked their respondents how well or badly the government has been handling the Brexit negotiations.

A common pattern is evident in responses to both of these questions. Assessments of the government’s handling of Brexit improved somewhat after Boris Johnson became Prime Minister, were bolstered by his success in winning the December 2019 election and then delivering Brexit, and reached a peak in March/April 2020. However, since then perceptions of the government’s performance have begun to go in the other direction.

Table 1 summarises the responses to the YouGov question during the course of Johnson’s first year. It shows for each month the average proportion saying the government was handling the negotiations well, and the average saying badly, across all of the polls the company conducted in that month.

By the time that Mrs May left Downing St very few voters indeed expressed much confidence in the government’s handling of Brexit. But the position improved somewhat after Mr Johnson succeeded her. Even so, until polling day in December, the proportion who thought the government was handling Brexit badly was, according to YouGov, still consistently above seven in ten. This was likely a consequence of the government’s inability to get a Brexit deal through Parliament. An attempt by the government to prorogue Parliament for an extended period was judged unlawful, the House of Commons withheld its approval of a revised version of the Brexit deal that Mr Johnson had negotiated, and the Prime Minister was forced by legislation that had been forced through Parliament by the opposition to seek a three-month delay to Britain’s exit from the EU until 31st January.

The outcome of the December election – an 80-seat majority for the Conservatives – finally allowed the government to get its Brexit deal through Parliament in time for Britain to leave at the end of January this year. Between them these two developments led to a sharp improvement in the public’s assessment of the government’s performance. After the election, the proportion thinking the government was handling Brexit badly fell below seven in ten to 64% for the first time since July, while by the time Brexit Day had come around at the end of January it was down to around a half.

Assessments of government handling of Brexit continued to become more positive thereafter and reached a peak in March/April 2020 – at which point the proportion thinking it was doing well was more or less equal to the proportion who thought they were doing badly. A similar trend is evident in the equivalent question asked by Kantar.

However, as we might anticipate, the improvement in evaluations of the government’s performance occurred primarily among Leave voters. Back in July last year, Leave voters (9%) were only a little more likely than Remain supporters (3%) to say that the government was handling the negotiations well (see Table 2). The two sides in the Brexit debate were more less united in their disapproval. But by April this year, with Brexit having been delivered, as many as 69% of Leave voters said the government was handling Brexit well, an increase of 60 points, whereas the figure among Remain voters was still no more than 21% (up 18 points). There was now a clear Brexit divide. 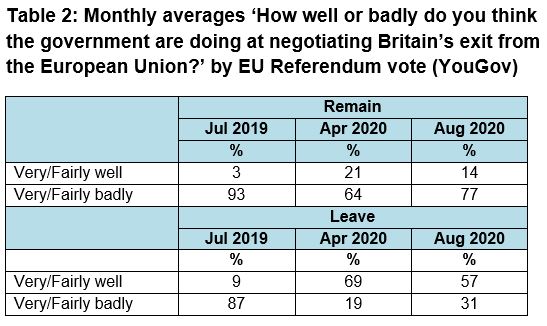 This divide still exists – but what has been a marked decline in evaluations of the government’s handling of Brexit since April (see Table 1) has occurred on a similar scale among both Remain and Leave voters (see Table 2). Negotiations about the UK’s future relationship with the EU have, of course, been taking place during the spring and summer, and it may be that Remain and Leave voters have been equally unhappy about the relative lack of progress. However, the talks have, as yet at least, received relatively little attention. Instead the news agenda has been dominated by the coronavirus pandemic – and it may be there that the explanation for the decline in voters’ evaluations of the handling of Brexit is to be found.

These have become relatively negative. For example, in April Opinium found on average that 54% of people approved of the UK Government’s handling of the coronavirus situation and 28% disapproved, However, by July only a third (33%) of the population approved and 46% disapproved. YouGov have reported a similar trend.

Meanwhile, a closer look at Opinium’s figures shows that between April and July approval of how the government has been handling coronavirus has fallen just as much among Leavers (a drop of 21 points) as it has among Remainers (22 points). It could be that a general perception that the government is not performing well on the major issue of the day is influencing assessments – among both Leavers and Remainers – of its competence in other areas, including Brexit.

Should an acceptable agreement with the EU be made and ratified before then, and should the government reverse the public perception that it is handling the pandemic badly, the confidence of voters in the government’s handling of Brexit may return to the levels of earlier this year.

However, unless both those conditions are satisfied, the government may find that it is struggling to secure much credit for finally delivering on Mr Johnson’s promise ‘to get Brexit done’.