Posted on 7 October 2022 by John Curtice

The dramatic collapse in support for the Conservatives in the wake of the ‘fiscal event’ a fortnight ago raises an intriguing question – what has happened to the Brexit divide in Britain’s electoral politics? The key foundation underpinning Boris Johnson’s electoral success in 2019 was to persuade three-quarters of those who had voted Leave in 2016 to back his promise to ‘get Brexit done’, while those who voted Remain were divided in their voting choices. But has that foundation of the Tories’ success now crumbled?

The table below shows for the main Britain-wide parties the average level of support they had among 2016 Remain and Leave voters as recorded by each polling company in its last poll before the end of September. In nearly all cases the poll in question was conducted well after the ‘fiscal event’, and thus reflects the subsequent swing in the polls. It also shows the change in support since the equivalent calculation for August, shortly before Liz Truss became Prime Minister, as well as since the last general election. 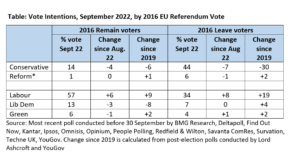 Less than half of those who voted Leave in 2016 say that they would vote Conservative in a general election now. This is the first time in this parliament that the figure has fallen below a half. One has to go back to the dying days of Theresa May’s premiership in the spring and summer of 2019, when overall support for the party was even lower than the 25% to which it has now fallen, to find the last time support for the party among Leavers in particular was this low (thanks on that occasion primarily to a rise in support for the Brexit Party). Indeed, it dropped to as little as 30% during the campaign for the European Parliament elections in May 2019. Most of Boris Johnson’s achievement in bringing Leave voters into the Tory fold has now been undone.

However, this reversal is not simply the result of the slide in Conservative fortunes over the last fortnight. True, as the table shows, support for the Conservatives has fallen since the end of August by somewhat more among Leavers (a drop of seven points) than it has among Remainers (four points). That will reflect in part the fact that support for the party among Remain supporters was already so low that it could not fall much further. In truth, support for the Conservatives had already fallen markedly by the time that the removal vans were taking Boris Johnson’s belongings away from Downing St. At the end of October last year, before Mr Johnson became embroiled in the Owen Paterson affair and ‘partygate’, the party still enjoyed the support of 61% of Leave voters. However, by the end of August this year that figure had fallen by ten points to 51%.

Rather than precipitating a new collapse in support among Leave supporters, the last fortnight has simply witnessed the further erosion of a citadel whose foundations had already been severely weakened during the latter months of Boris Johnson’s premiership.

Meanwhile, it should be noted that the rise in support for Labour since the end of August has been almost as high among Remain voters (six points) as it has among their Leave counterparts (eight points). In part Labour may have made as much progress among Remainers during the last fortnight by squeezing the Liberal Democrats (whose vote has fallen over the last month among Remainers by three points) as well by winning over some of the rump of Conservative Remainers. In any event, while over the course of the last three years Labour has advanced more strongly among Leave voters (up 19 points) than it has among Remain supporters (up 9 points), this relative success is primarily a reflection of the progress the party had already made among Leave supporters well before the last fortnight.

Both Leave and Remain voters have, it seems, reacted in similar fashion to the ‘fiscal event’ and its aftermath. This, perhaps, is not surprising given that one of voters’ central concerns is the government’s apparent lack of competence rather than its ideological direction. Even so, it still means that the party that delivered Brexit now no longer has the support of a majority of those who voted for it. That must give Tory MPs some cause for concern.

5 thoughts on “Do Leave Voters Still Support The Conservatives?”