Following the UK’s withdrawal from the European Union and thus the Union’s freedom of movement provisions, EU citizens who were living in the UK before the end of last year and who wish to carry on living here have until this coming Wednesday to apply for a ‘settled status’ that will enable them to continue to live and work in the UK. Many more applications – over 5 million – have been received than were originally anticipated (with some yet to be processed). Nevertheless, despite the fact that late applications may be accepted in some circumstances, concern has been expressed that some people will still fall through the net. At the same time, for some it is not easy to provide the documentary evidence that will convince the Home Office that they should qualify.

In short, it is highly likely that at some point in the not too distant future cases will emerge of EU citizens living in the UK – perhaps for some considerable time – who for one reason or another have not obtained ‘settled status’, and thus are no longer living here legally. They may well find themselves out of a job, denied health care, and find it impossible to find anywhere to rent. They might eventually be subject to deportation.

But how do the public feel about this prospect? While most voters might be opposed to the continuation of freedom of movement, previous polling has also identified widespread support for allowing those EU citizens who were already living in the UK to remain here. How then might voters feel if the termination of freedom of movement in practice compromises the ability of some EU citizens to stay here?

As part of our Future of Britain project that is investigating public attitudes towards post-Brexit public policy, we asked our respondents both at the beginning of last year and again at the beginning of this year whether EU citizens who had failed to secure ‘settled status’ should be required to leave the UK or not. The question read as follows:

“EU citizens (other than those from Ireland) who have been living in Britain since before the EU referendum and who now wish to stay are required to apply for and be granted ‘settled status’ by the end of June 2021.

What do you think should happen to those EU citizens living in Britain who have not been granted ‘settled status’ by the end of June 2021? Do you think they should or should not be required to leave the country?

Table 1 reveals that, on both occasions, among voters as a whole opponents of the removal of EU citizens without ‘settled status’ outnumbered supporters by three to two. Unsurprisingly, those who are against ending freedom of movement oppose the idea by as much as four to one. However, even among those voters who think that EU citizens should have to apply to come to the UK, opinion on the issue is evenly divided. It seems that for many voters who support the ending of freedom of movement, the strict enforcement of the rules on settled status might prove to be a step too far. 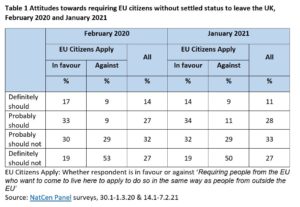 Of course, as we might anticipate, those who voted Remain and those who backed Leave have rather different views on the subject. As Table 2 shows, around three-quarters of Remain voters are opposed to the removal of EU citizens without ‘settled status’, while on balance Leave voters are narrowly in favour. Even so, there is still many a Leave voter who does not back the idea – in our first survey 42% were opposed while in our most recent survey the figure was 46%. While the issue may be one about which Remain supporters are more likely to express concern, it is evidently one where the sensibilities of a significant proportion of Leave voters could potentially also be offended. 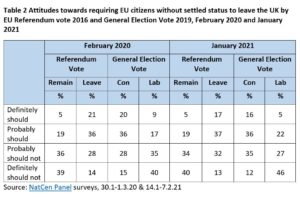 This suggests the issue is one that the government will need to address with care in the coming weeks and months. As Table 2 shows, the division among Leave voters means that there is a similar division among Conservative supporters too – well over 40% of those who voted Conservative in 2019 are opposed to the removal of EU citizens without ‘settled status’.   In contrast, Labour (and indeed Liberal Democrat) voters are relatively united on the issue – around three in four are opposed – suggesting that the opposition will be well placed to harry the government if the Home Office does attempt to adopt a tough line with those EU citizens who fall through the ‘settled status’ net.

Migration and freedom of movement

2 thoughts on “Enforcing EU Settled Status: a Potential Political Minefield for the Government?”