Has There Been a Shift in Support for Brexit?

Posted on 8 February 2019 by John Curtice

Unsurprisingly, protagonists on all sides in the Brexit debate are keen to claim that their views reflect the will of a majority of voters. After all, the decision to leave the EU was made by the public in the first place, so being able to argue that what should happen now is backed by voters is a potentially valuable currency in the political debate. Thus, the Prime Minister, for example, insists that in pursuing Brexit she is delivering ‘the Brexit people voted for‘, a vote that, she argues, should not be questioned by asking voters their view a second time. Opponents of Brexit, in contrast, often take the view that voters were misinformed – even misled –  during the EU referendum, and now that they are more aware of the supposed downsides of leaving the EU they should be given the chance to register their second thoughts in a second ballot.

The intensity of this argument reflects, in part at least, the narrowness of the outcome of the referendum in June 2016. Against the backdrop of a 52% vote for Leave and 48% for Remain, not many voters would have to change their minds for the balance of opinion to be tilted in the opposite direction. So, with March 29 – the date when the UK is currently scheduled to leave the EU –  rapidly approaching, where does the balance of opinion now lie on the principle of leaving the EU?

Regular users of our site will be aware that polls that have asked people how they would vote in another EU referendum have for some time been pointing to a small lead for Remain. For much of last year our poll of polls, a running average of the last half dozen readings of second referendum vote intentions, put Remain on 52% and Leave 48%, the mirror image of the outcome in 2016. However, given all the potential pitfalls of polling, such a lead was too narrow for anyone to be sure what the outcome would be if a second ballot were to be held.

In recent months, though, the Remain lead has grown somewhat in our poll of polls. By the beginning of October, it had crept up to Remain 53%, Leave 47%. Now, since the turn of the year it has increased further to Remain 54%, Leave 46%. This movement has also been replicated in the pattern of responses to the question that YouGov regularly ask, ‘In hindsight, do you think Britain was right or wrong to vote to leave the EU?’. Until the 2017 general election typically more people said that the decision to leave the EU was right than stated it was wrong. Since then, however, the oppose has been the case. Even so, by the spring of 2018, on average the proportion who said that the decision was wrong (45%) was still only three points higher than the proportion who said it was right (42%). However, in the readings that YouGov has taken in the last three months, that lead has grown on average to as much as eight points, with as many as 48% saying the decision was wrong, and only 40% that it was right.

So, what has happened? Why does it seem that opinion has swung against Brexit, albeit to no more than a modest (indeed, very modest) degree? In particular, does it signal that some Leave voters at least have changed their minds and that the much-anticipated phenomenon (on the Remain side at least) of ‘BreGret’ is finally making an appearance?

To establish whether or not this is the case, we need to examine the flow of opinion since June 2016. Table 1 provides such an analysis for polls undertaken in the spring of last year. Based on the average of six polls conducted in April/May 2018, it shows separately for those who in 2016 voted Remain and those who backed Leave – together with those who did not vote – how at that point they said they would vote in another EU referendum. 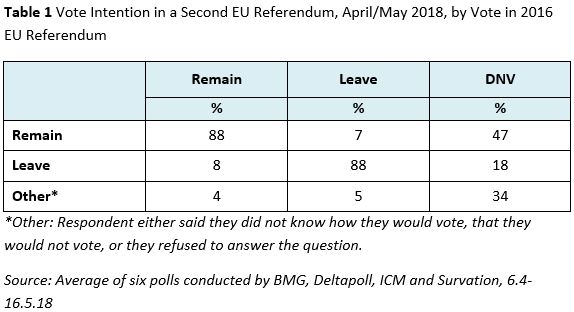 One point immediately stands out. The responses given by Remain and Leave voters were almost an exact mirror image of each other. In both cases, no less than 88% said that they would vote the same way again. And while 7% of those who voted Leave said that they would now vote Remain, they were matched by the 8% of Remain voters who stated that they would now back Leave. In short, at this point movement in and out of the Remain and Leave camps had had more or less no impact on the overall balance of support for the two options. It appeared that if only those who voted in 2016 were to vote again, the outcome would be very much the same as that in the first referendum.

How, then, was it the case that, on average, these polls were putting Remain slightly ahead, by 52% to 48%? The answer lies in the responses given by those who did not vote in 2016. While around one in three of them did not express a preference, among the remaining two-thirds that did, those who said they would now vote Remain outnumbered those who indicated they would back Leave by more than 2.5 to 1. The reason why the balance of opinion had shifted in favour of Remain, even though very few Leave voters had changed their minds, was because those who had not voted before (in some cases because they had been too young to do so) were now decisively in favour of Remain.

How does this picture compare with the one that is obtained if we undertake the same analysis for the most recent polls that have asked people how they would vote a second time around? Where things stand now is shown in Table 2. 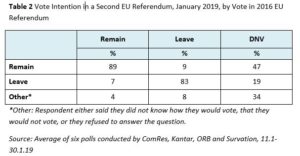 This table suggests that very little has changed among those who did not vote in 2016. The figures for this group of voters are almost identical to those in Table 1, again with Remain preferred to Leave by more than 2.5:1. Much the same is true of those who voted Remain. At 89% the proportion who say that they would vote the same way again is almost identical to the 88% figure in Table 1.

However, among Leave supporters the figures are now a little different. True, by far and away their most common response is still to say they would vote the same way again. But, at 83%, the proportion who would do so is five points lower than it was in the spring of 2018, and six points lower than the current equivalent figure among Remain voters.

It looks then as though the modest but perceptible increase in the lead of Remain over Leave in the last nine months has been occasioned by a small rise in the proportion of Leave voters who now have doubts or, in some cases, second thoughts about their original choice. A not dissimilar pattern is found in the responses to YouGov’s ‘In hindsight’ question. On average, just 82% of Leave voters now say that the decision to Leave was right, down three points on the equivalent figure for April/May last year, while, at 89%, the proportion of Remain supporters who say that it was wrong is much the same as the 88% who did so last spring.

Of course, this analysis but begs another question –  why do some Leave voters appear to have changed their minds in recent months? That, of course, is a much more difficult question to answer, not least because the data needed to analyse the various possibilities systematically are not available. However, we can start from the observation that the single best predictor of how people voted in the EU referendum was whether they thought leaving the EU would be good or bad for Britain’s economy, and the fact that, subsequently, we have shown that such economic perceptions appear to be a relatively good predictor of whether or not people have changed their minds about Brexit.

Unfortunately, and rather surprisingly, polling of voters’ evaluations of the economic consequences of Brexit has become relatively scarce in recent months. However, among what there is there is some evidence that voters have become somewhat more pessimistic about the economic consequences of Brexit.  The longest and most regular time series on this subject comes from ORB. Since July 2018 their monthly polls have consistently found that more people disagree with the statement that ‘Britain will be economically better-off post Brexit’ than agree with it, in contrast to the position prior to that date when the opposite was usually the case.  However, what of course matters to us here is whether Leave voters in particular have become more pessimistic about the economic consequences (after all, any increase in pessimism among Remain supporters should simply reinforce their existing views rather than change their minds) and, unfortunately, ORB’s polls do not tell us how their respondents voted in 2016.

But there is another, albeit much more occasional, time series from Opinium which also suggests that there has been an increase in economic pessimism – and where we can look separately at the trend among Leave voters. This is shown in Table 3. This table demonstrates that in May and June last year, those Leave voters who thought that the economy would be better after Brexit clearly outnumbered those who thought it would be worse. Now, however, the two groups appear to be of roughly equal size. It seems not unlikely that this trend has helped diminish the loyalty of some Leave voters to the choice they made in 2016. 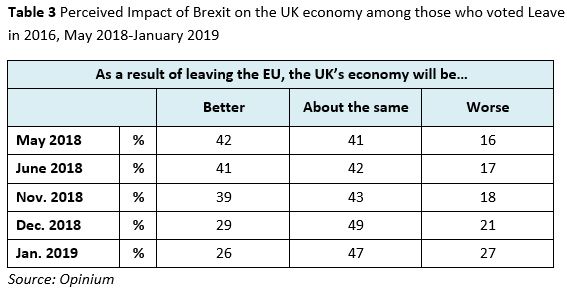 Nobody should assert on the basis of the analysis in this blog that it is now clear that the outcome of a second referendum would be different from that of the first. Given the potential difficulties that faces all polling, the Remain lead is both too narrow and too reliant on the views of those who did not vote in June 2016 (who might or might not vote in another ballot) for anything other than caution to be the order of the day. Even if the polls are entirely accurate, such a narrow lead might still be overturned if Leave were to fight the better campaign – as they are widely adjudged to have done in 2016.

That said, it looks though there has been a modest but discernible softening of the Leave vote. As a result, those who wish to question whether Brexit does still represent ‘the will of the people’ do now have rather more evidence with which to back their argument. In the meantime, it might at least be thought somewhat ironic that doubts about Brexit appear to have grown in the minds of some Leave voters just as the scheduled date for the UK’s departure is coming into sight.

Do Voters Still Want To Leave The EU? How They View The Brexit Process Two Years On

The economics of Brexit in voters’ eyes

72 thoughts on “Has There Been a Shift in Support for Brexit?”