Late yesterday and today have seen the inevitable last minute flurry of polls of voting intentions in the referendum. Polls have been released by six pollsters based in the UK, Opinium, TNS, ComRes, YouGov, Ipsos MORI and Populus, while there have also been a couple of polls from overseas pollsters, Survey Monkey (USA) and IBRIS (Poland) for which less in the way of detail is available and are not referenced elsewhere on this site.

For the most part, the overall message of these polls is clear. Remain’s position appears to be stronger than it appeared to be last week, when there was undoubtedly a drop in its support. However, it is not clear that it has made further progress beyond that which was already in evidence in polls published at the weekend. Still, what it has achieved might just be enough for Remain to win even though it now seems clear that it has been the Leave side have had the better of the official four week campaign. We elaborate on these points in what follows.

The most recent results, together with the polls from Survation and ORB that were released earlier this week, are summarised in the table below. Most reckon that the outcome will be close, with five out of eight estimating that neither side is more than two points adrift of the winning post. For the most part, polls done over the phone tend to present a more optimistic picture for Remain than do those undertaken via the internet, a point to which we return below. It would seem that after last week’s wobble for the Remain camp, we are back to the position in which we have been for virtually all of the campaign, whereby the balance of the evidence favours Remain, but by no means all of it. 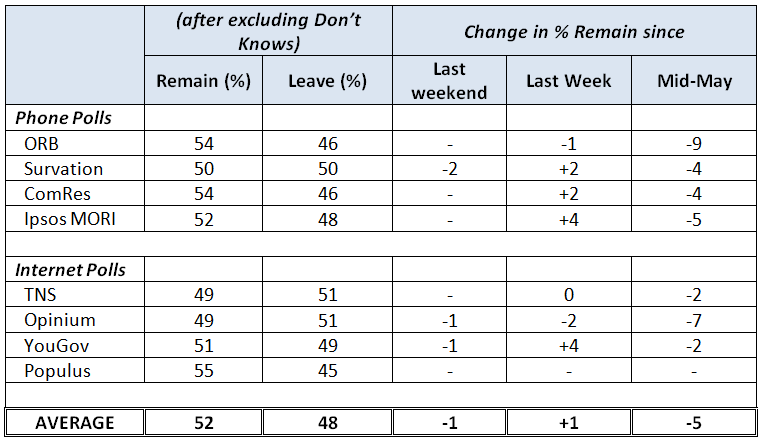 Last week. Polls conducted between 7 and 15 June and published during the course of last week

All change figures exclude the impact of methodological changes made by the polling company in the intervening period.

An easy interpretation as to why the progress made by Leave last week has been reversed is that in the final days of the campaign some voters have taken fright at the risks that they think are associated with the prospect of leaving.  However, the picture is not as straightforward as it initially seems. Quite a few of the most recent polls have implemented changes in the way that they either weight/filter their data or deal with Don’t Knows (or, in one or two instances, to extend coverage to Northern Ireland). Moreover, in each case they have done so in such a way as to increase the estimated level support for Remain. This is true of TNS (whose change added 3 points to their estimate for Remain after Don’t Knows are excluded), ORB (2 points), ComRes, Ipsos MORI and YouGov (all 1 point). (Meanwhile, although there is no previous reading with which to compare it, Populus’ estimate of support for Remain, the highest of any internet poll since last November, is in part the product of how it has reallocated Don’t Knows and estimated respondents’  likelihood of voting, a procedure that added 2-3 points to its headline figure.)

So some of the apparent swing back to Remain is not the product of any change in public opinion, but rather of decisions made by the polling companies as to how they should best report their data. That is not, of course, to argue that the companies are wrong in making those decisions, but they do mean that we have to be careful when trying to assess the what has happened during the course of the last week.

Our table tries to find a way through this undergrowth.  We show three estimates of how public opinion has shifted during the final phase of the campaign – since last weekend, since last week (that is in polls taken shortly before the murder of Labour MP, Jo Cox), and since mid-May, just before the official campaign period began on May 27th. In each case, we have, in so far as it is possible, stripped out the effect of changes in reporting and methodology that were implemented by the polling companies (of which there were also a number of others between mid-May and last week).

As can be seen, this paints a rather different picture of how support for the two sides has evolved during the course of the campaign. First, there has been a modest increase in support for Remain since last week, that is when its support was unusually low. However, even that progress is not evident in all polls and may be no more than of the order of one to two points. Second, on the limited evidence available it is not possible to argue that there has clearly been a gradual, continuous increase in support for Remain during the course of the final few days of the campaign – as has been suggested would happen as voters began to take into account the perceived risks of leaving the EU. Those companies that polled this week and at the back end of last week (just after the murder of Jo Cox) have not registered any increase in support for Remain over that period.

(Neither of these conclusions is significantly challenged if we also take into account the recent polls conducted by Survey Monkey and IBRIS. While in its most recent poll Survey Monkey put Remain on 52%, up 2 points on last week and 3 points on the weekend, IBRIS put the two sides on 50% each, that is, Remain down a point on last week and unchanged since the weekend.)

At the same time, what is clear is that, despite the fact that there has been some recovery in Remain support since last week, its position is still much weaker than it was before the official period of campaigning began on May 27. Once we strip out the effect of the various methodological changes that the companies have made during the intervening period, every single pollster has registered a substantial swing to Leave during this period. It would appear that, whatever emerges from the ballot boxes tonight, it is Leave that won the referendum campaign.

Meanwhile, as we noted earlier, we are left to the end with a divergence between the internet and the phone polls, albeit a much smaller one than has been evident for most of the referendum campaign.  Populus’ late entry into the field apart, the last three internet polls point to a 50% vote each for Remain and Leave, with perhaps the latter just marginally ahead. In contrast the four phone polls point to Remain 52.5%, Leave 47.5%. If the suggestion from NatCen’s research earlier this week that the truth is most likely to fall between the two is still valid in the wake of the various methodological tweaks that the polling companies have made subsequently, then Remain would narrowly squeak home.

But if they do, the victory could prove a Pyrrhic one so far as the Prime Minister is concerned. He has failed to take his party with him; on average the latest polls suggest that just 45% of those who voted Conservative last year will vote Remain today, while 55% will back Leave. For all the criticism that Labour’s efforts during the campaign have received, Mr Corbyn has been far more successful in bringing his voters with him – on average 72% of those who voted Labour last year say they will vote to Remain, while just 28% are backing Leave. Tory MPs are likely to be unforgiving if Mr Cameron continues to appear to be as out of touch with his party as he has been in this referendum.

Meanwhile the Prime Minister will be left with a badly divided country. On average 71% of those aged 18-24 say they are voting to Remain, compared with just 42% of those aged 65 and over. While 61% of ‘AB’ professional and managers are backing Remain, just 43% of those in the ‘DE’ working class are doing so. If he survives this vote, Mr Cameron’s biggest task may well be to persuade voters that he is Prime Minister of all the country rather than just of one half of it.