Immigration and Euroscepticism: The Rising Storm

The public has become acutely aware of changes in immigration rates and attributes these changes to the UK’s membership of the European Union. This has been a direct consequence of the growth of immigration from the EU accession countries in Eastern and Central Europe. Inevitably, this process has important implications for the likelihood of a ‘leave’ vote in the forthcoming EU Referendum. 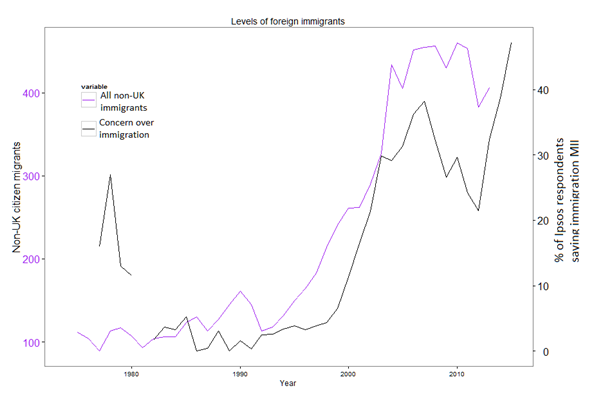 Immigration increased markedly at the end of century and has remained exceptionally high since. We can see a spike in concern (Figure 2) in the 1970s when the National Front obtained some degree of political presence, even though there was no growth in immigration itself around that time. Far more noticeable, however, is the rise in concern that started just before the turn of the century. From this point on concern about immigration was closely associated with immigration levels.  The dip following the onset of the economic crisis in 2007/8 is unsurprising given the impact of the crisis on levels of concern about the economy, but levels of concern began to increase once more after only a short interlude.

EU immigration played no part in the rising immigration in the late 1990s and early 2000s – this was produced by an increase in asylum seekers from other parts of the world. EU immigration takes off with the 2004 accession of former communist-bloc countries of Eastern Europe into the EU and the Government’s decision not to restrict immigration from these countries during their first five years of EU membership. After 2004 EU immigration formed a major component of immigration into Britain. By 2013 it was the largest component.

Did the public connect this change in the composition of immigration with their view of the EU? Recent rises in concern about immigration appear to be linked closely with trends in EU immigration and not with immigration from other sources: concern has increased along with increasing EU immigration rates even though levels of immigration from other sources are falling or flat. In itself, however, this aggregate relationship is not compelling evidence that individuals are linking their attitudes to immigration with those to the EU. Fortunately, we are able to look at this relationship more closely using the Continuous Monitoring Survey’s monthly readings, which contain measures of both concern about immigration and attitudes towards the EU for each respondent. We can therefore examine whether concern about immigration has become linked with opposition to the EU. Below (Figure 4) we show the difference in the pattern of response to the question, “How much do you approve of Britain’s membership of the EU?”,  between those who believe immigration is one of the most important issues facing the country, and those who do not. 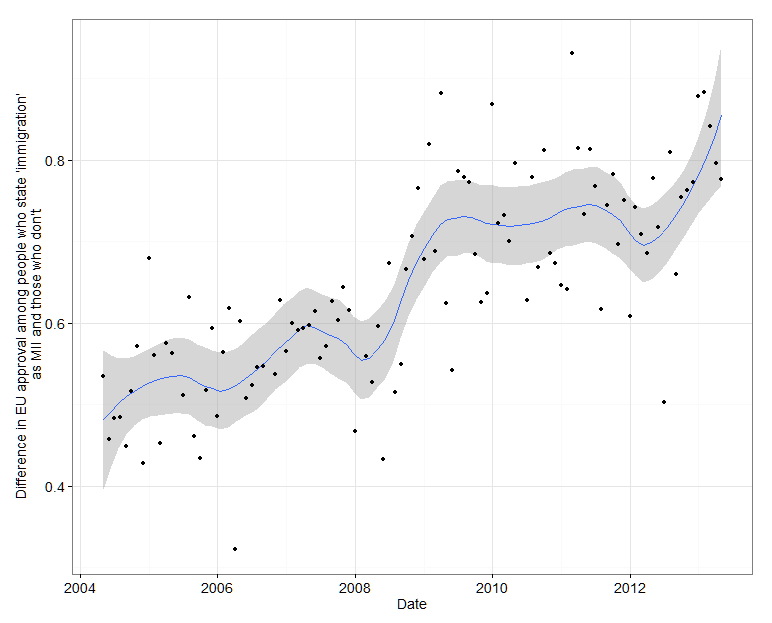 The difference between people who believe immigration is an important problem facing the country and those who do not in their level of approval of the EU widens sharply during the years following the accession in 2004 of countries from Central and Eastern Europe before flattening off during the economic crisis, only to rise steeply shortly afterwards as rates of immigration from the EU also shoot upwards.

Clearly, the link between concern about immigration and a negative view of the EU has strengthened considerably in the years following the opening of access to immigrants from the 2004 accession countries. The relevance of this relationship for the forthcoming EU referendum is inescapable. Below we show the connection between believing that “too many immigrants have been let in to Britain” and support for leaving the EU. We also illustrate the significance of this relationship by comparing the position now with that at the time of  1975 referendum on EU membership (Figure 5).

Figure 5 Support for Leaving the EU by Perceptions of the Level of Immigration, 1975 and 2015 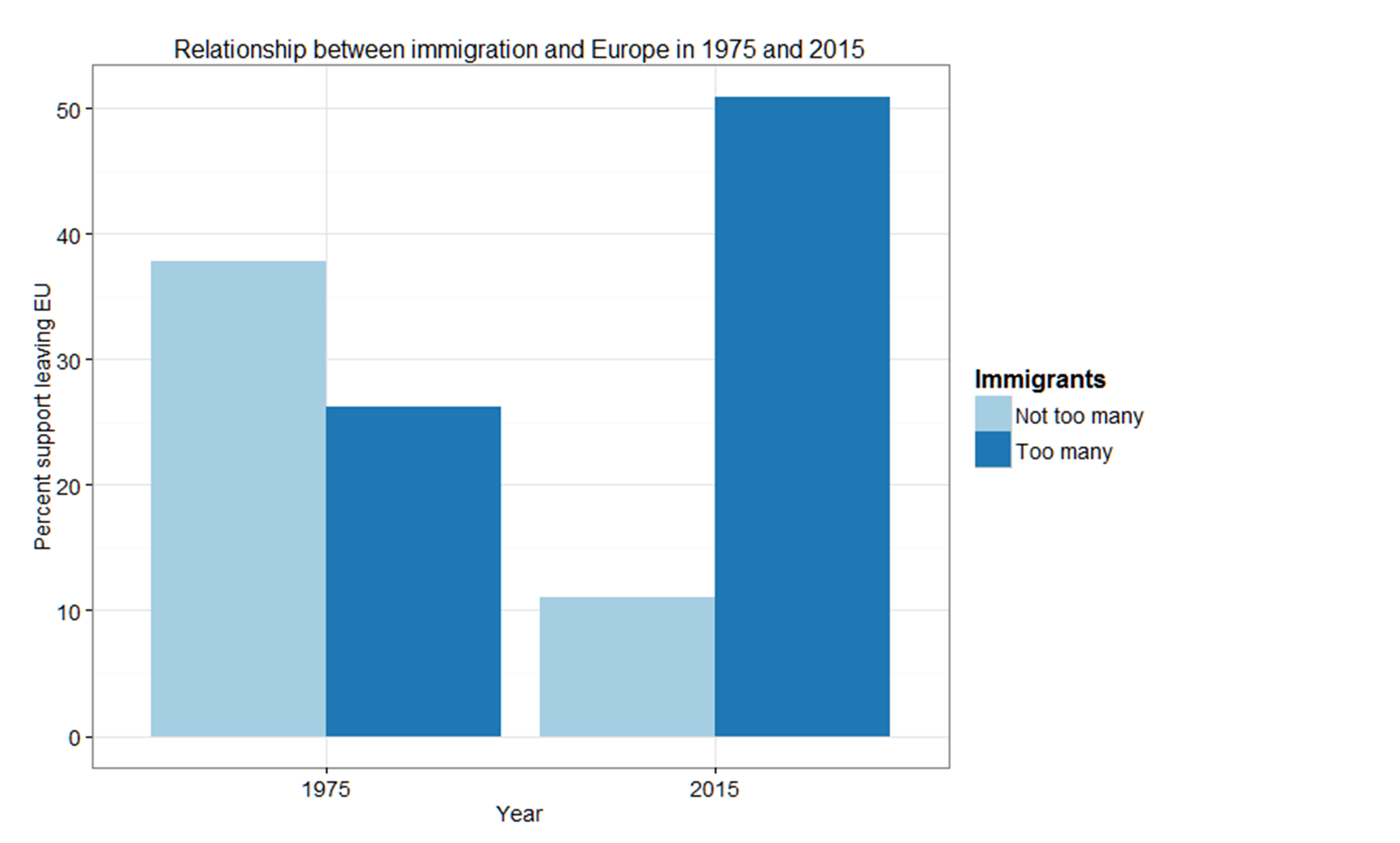 In 2015 only 10% of people who do not believe too many immigrants have been let into the country would vote to leave the EU. But no less than 50% of those who believe too many immigrants have been let in would do so. We might think that this reflects an inevitable relationship between anti-immigrant sentiment and a rejection of the EU, perhaps driven by a general distrust of foreigners or a fear of societal change. Yet in 1975 there was no significant relationship between immigration and support for leaving the EU. If anything, the relationship was the reverse.

The relationship between immigration attitudes and opposition to the EU has strengthened greatly in recent years, in direct response to the dramatic growth in immigration from, specifically, the 2004 EU accession countries. Recent immigration from Bulgaria and Romania is likewise accompanied by a markedly increasing level of concern about immigration. This spiral of alarm and negativity will clearly have an influence on the outcome of the EU referendum vote.

This post was co-authored by Jonathan Mellon, Research Fellow at Nuffield College, Oxford. It was first published on the UK in a Changing Europe website in collaboration with The Guardian

Geoff Evans is Professor of Politics at the University of Oxford and a Fellow of Nuffield College, Oxford

Migration and freedom of movement The EU Referendum

6 thoughts on “Immigration and Euroscepticism: The Rising Storm”