One of the intriguing and important questions about the fallout from the EU referendum is whether it will serve to reshape British party politics. Both UKIP (in the pro-Brexit camp) and the Liberal Democrats (in the anti-Brexit one) are making their very different perspectives on whether and how we should leave the EU the corner stone of their current appeals, as befits what were already the country’s most anti- and pro-EU parties respectively. In so doing they are competing for votes with two larger parties both of whom found their supporters badly divided in the referendum last June. We thus might wonder whether Conservative supporters who voted to Remain will stay loyal to a party that is now pursuing what many describe as a ‘hard’ Brexit. Perhaps they might be enticed to switch to the Liberal Democrats, who after all have traditionally been the party of protest for discontented Conservatives. Meanwhile, it has been widely suggested that Labour is at risk of losing many of its (working class) Leave supporters in the wake of an explicit appeal from UKIP for their support.

That analysis in itself raised some questions about the viability of a UKIP strategy that is apparently focused on winning over Labour Leave supporters in the North and the Midlands. But, of course, the acid test of what impact, if any, the debate about Brexit is having on support for the political parties is to examine whether there is any evidence that those who voted for Remain or Leave have switched their party allegiance in one direction or the other since the EU referendum. That is what I have done in an article to appear in the latest edition of IPPR’s journal, Juncture. The analysis is based on polls conducted by YouGov – these are not only more numerous than those conducted by any other company but are also the only polls that have regularly reported separately the current vote intentions of Remain and Leave supporters.

Amongst voters as a whole there have been some clear movements since Theresa May became Prime Minister and her strategy for Brexit emerged. Labour support stood at 30% on average in nine polls conducted by YouGov in August and September last year, only a little below the 31% that the party won in the 2015 general election. In the seven polls that the company has conducted since the beginning of the year, that figure has fallen to just 25%.

Despite this decline in Labour support, UKIP have done little more than tread water.  At 13%, their average level of support in YouGov’s polls to date this year is exactly the same as it was in August/September – and in the 2015 general election. Meanwhile the Conservatives have not done much better, edging up from 39% to 40%, enough to put them just a couple of points above the share of the vote won by the party in 2015.

The party that has made some discernible, if modest progress during the course of the Brexit debate is the Liberal Democrats. Last August and September the party was still running at just the 8% that it scored in 2015. This year it has been averaging 11%. The first signs of this turnaround began to emerge in the run-up to the Richmond by-election (held at the beginning of December), in which the party pulled off a notable victory. But it seems to have consolidated further since then. 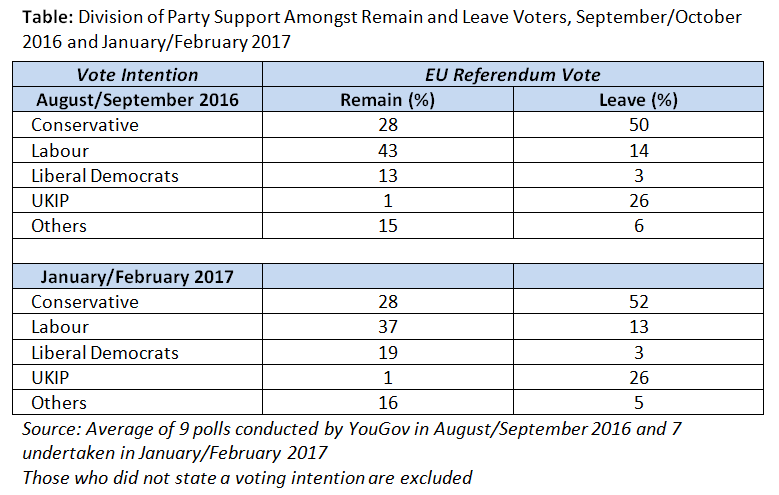 There are two other features of the table that we should note. First, even in its currently enfeebled state, and even after losing ground amongst those who voted Remain, Labour is still the single most popular party amongst those who wanted to stay in the EU, and it remains nearly three times as popular amongst Remain voters than amongst Leave voters. Second, UKIP’s support is almost wholly confined to those who voted Leave, amongst whom the party is already well ahead of Labour. Between them these two patterns suggest that the potential for UKIP to increase its support further by winning over Labour voters is relatively limited. UKIP, it seems, are only capable of winning the support of those who voted Leave last June, and such voters are relatively thin on the ground in Labour’s ranks. In contrast, there are plenty of Remain supporters to whom the Liberal Democrats would seem to have at least some chance of appealing.

In voting in favour of the invocation of Article 50, Labour argued that it had to respect referendum result. That decision may, indeed, have helped shore up the support of the minority of its voters who voted to Leave. But, it may also have put at risk the loyalty of the much larger group of its voters who backed Remain. And in the battle to win over disenchanted Labour voters, it is the pro-Remain Liberal Democrats, not pro-Brexit UKIP, who have drawn first blood.

7 thoughts on “Is Brexit Causing Voters To Switch Parties?”