On Thursday morning journalists and politicians were avidly discussing the apparent implications of two more opinion polls released within hours of each other. Yet no sooner had they begun to digest their results and the political world – and many ordinary citizens – were shocked by the murder of the Labour MP, Jo Cox, on the streets of her Yorkshire constituency. Our condolences go to Jo and her family and friends, and in line with the decision made by both campaigns in the referendum, the publication of this blog was postponed yesterday as a mark of respect.

Still, we have been but reminded just how precious it is that politicians should be able to campaign, voters make their choice, and everyone make their contribution to the debate without fear or favour. So we will now return to the attempt of this site to inform the referendum debate by trying to provide impartial insight into the evidence being provided by the opinion polls. Doubtless not everyone will agree with our interpretation, but hopefully all will still find it useful and informative.

We argued in our last two blogs that there appeared to have been a scintilla of a swing to Leave since the advent of ‘purdah’ on May 27. After having consistently put Remain on 50% and Leave on 50% ever since last September (after excluding Don’t Knows), internet polls were now on average putting Leave on 51% and Remain on 49%. However, although a number of these polls were putting support for Leave at a record high, the evidence that there had been a swing to Leave still had to be regarded with considerable caution. Not least of the reasons for that was that only three phone polls had been conducted since May 27, and while on average they reported an easing of the Remain vote from 56% to 53%, much of that apparent fall rested on the results of an ICM poll which, in reporting only a 48% vote for Remain, seemed to be out of step with virtually every other piece of phone polling.

No longer is that caution warranted. Seven internet polls published during the last seven days –  all of them conducted since 7 June –  have on average put Leave on 53% and Remain on 47%, implying that there has been a swing to Leave of three points during the last three weeks. It also, of course, means that if the internet polls are to be believed, Leave is now ahead.

But perhaps even more important are the findings of six phone polls that have now also been published, including one each from ComRes, Ipsos MORI and Survation, none of whom had polled for a month.  All those companies also reported a swing to Leave, as too did ORB, while ICM replicated its previous finding that Leave are now ahead. (The sixth poll, from BMG represented the first phone poll to be conducted by that company.) On average these six polls put Remain on 50%, Leave 50%. Not only do these figures imply that there might have been an even bigger swing to Leave than that suggested by the internet polls, but also that what so far has been one of the most striking features of polling in the referendum – the gap between phone and internet polls – may now have narrowed noticeably.

These last two statements, however, need a little closer inspection. As we noted previously, in recent weeks a number of internet polls have tweaked their sampling and/or weighting procedures with the effect of increasing their estimate of support for Remain. In a sense therefore it is even more remarkable that, nevertheless, those polls have still recorded a swing to Leave. Meanwhile, as signalled in our last blog, Ipsos MORI have now made changes to the methodology of their phone polls that cumulatively have the estimated effect of adding three or four points to Leave. Thus part of the reason why the two kinds of poll may have converged is that they have both changed their methods, as both phone and internet pollsters respond to the criticisms that have been made of some their earlier efforts.

To get a clearer picture of the size of the swing to Leave that has been identified by the polls irrespective of changes in method and differences in when they were last conducted, we show in the table below the difference between the most recent reading of each company and what the same poll said four weeks ago after taking into account (in so far as is possible) the estimated impact of any methodological changes that have been reported by the company during the last four weeks. 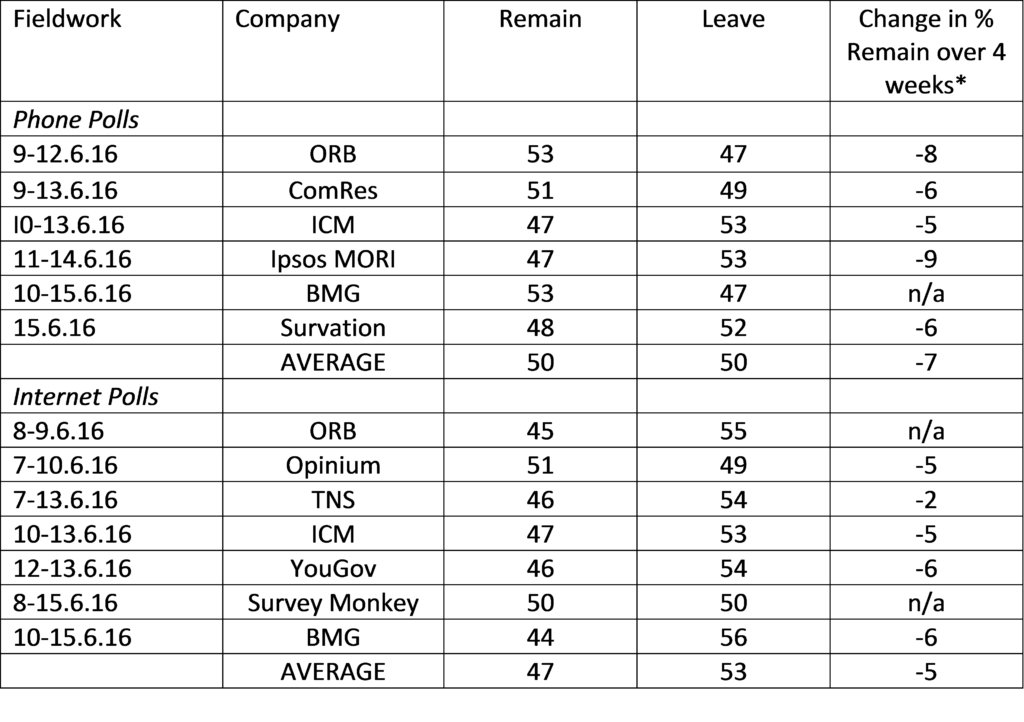 * After taking into account estimated impact of methodology changes. n/a: Not available

As we can see, this calculation also suggests that there has been a 7 point swing to Leave over the last few weeks. However, at the same time it also suggests that, at 5 points, the swing in the internet polls may not have been so dissimilar to that in the phone polls after all.

In short, however we look at the evidence, it appears that far from witnessing just a scintilla of a swing to Leave, the last few weeks have seen a significant leap in its support, with the consequence that the balance of the polling evidence is no longer in Remain’s favour. This can only be regarded as a dramatic movement in a referendum campaign that up to now has been notable for the remarkable stability in the level of support for the two options.

But what light do the polls shed on why this change has happened? Now on this, many polls are silent because they do no more than ask people whether and how they will vote. As a result, all they give us are the details of the demographic and partisan breakdown of the vote, and the examination of these does not uncover any consistent evidence that any particular group has especially been inclined to swing to Leave. For example,  the average level of support for Leave in recent polls amongst those who voted Conservative in 2015 is, at 57%, up five points on the equivalent figure for mid-May – but equally, at 36% the level of support amongst Labour supporters is up by six points. Nevertheless, here are four clues in recent polls as to why the Remain side may have lost so much ground,  since (with the onset of ‘purdah’) it has no longer had access to the civil service machine to help it dominate the media agenda.

In short, it looks as though the Remain side may have over-egged the pudding in their attempts to persuade voters of the allegedly dire future economic consequences of a decision to leave, while, in contrast, the Leave side have been relatively successful in conveying a simple fiscal message and an easily understood strapline.

Of course, at this point, we need to remember that leaving the EU is still more likely to be regarded as a risk than staying (even though voters are just as likely to say they are concerned about what would happen to immigration if we stayed as they are about the implications for the economy of leaving), and perhaps some risk averse voters may yet swing back to Remain at the last minute. We need to remember too that even final polls of vote intentions in referendums often overestimate the level of support for change that emerges in the ballot box. But even if we allow for these possibilities (not certainties), the Leave lead in the polls must now be regarded as being not far short of what it needs at this stage in the campaign to have an evens chance of winning. The outcome of the referendum has never looked more uncertain than it does now.

46 thoughts on “Leave Make A Leap”