As last week, much of the media commentary on the polls this week has suggested that Remain has made a decisive breakthrough. On Sunday The Observer kicked off with the contention that its latest poll from Opinium showed there had been a substantial shift towards Remain amongst Conservative supporters. This was followed by a poll from ORB for The Daily Telegraph, which for the second week in a row suggested that there had been a substantial move towards Remain amongst voters as a whole, a swing that was not only particularly marked amongst Conservative supporters, but amongst older voters too. Between them these reports suggested that the various warnings from David Cameron and George Osborne about the economic consequences of a vote to leave the EU, warnings that have come to be dubbed ‘Project Fear, were finally beginning to bear fruit for the Remain camp.

However, one or two polls do not make a trend, especially when in one instance the poll in question contains only 800 interviews and therefore its estimates for any particular sub-group can move up and down quite a bit simply by chance. It is much better to look at the collective evidence of all of the polls. Doing so raises considerable doubt about the validity of some of the claims that have been made about the Remain side’s apparent progress.

Above all, it is far from clear that there has been a significant movement to Remain amongst voters in general. In the Table below we show the latest estimate of the level of support for Remain and Leave (after Don’t Knows have been left to one side) for each of the companies that has been polling regularly during the course of the referendum. In each case we also show how this estimate compares with the one that was obtained when the same poll was conducted in the middle two weeks of April. Therefore for each poll we are assessing how much movement it has registered during the last month or so. However, we should note that in three instances the company in question either amended its weighting procedures, in each case in such a way as to give a slight boost to the level support for Remain. In these three cases the figure quoted in the final column is the one that would have been obtained if the change in question had not been made.

Referendum Vote Intentions in Each Polling Company’s Most Recent Poll 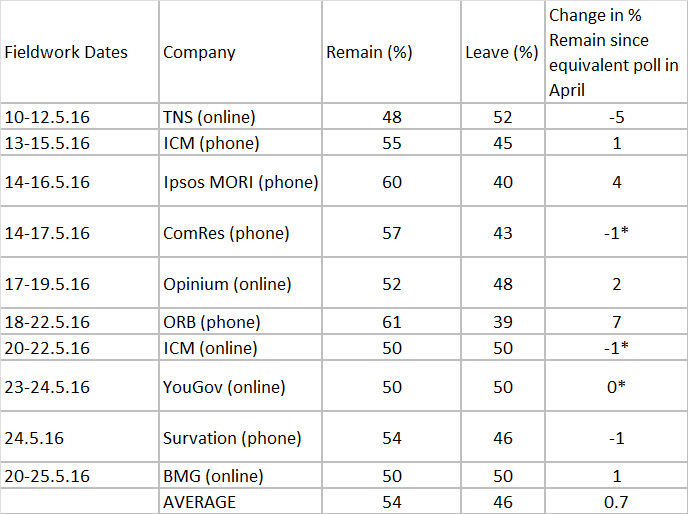 * after taking into account the impact of methodological changes on the estimates of support for Remain and Leave.

Now, as some of the newspaper headlines have suggested, one or two polls have indeed identified a substantial move towards Remain. Indeed, at 61%, ORB’s estimated level of support for that side of the argument was higher than that recorded by any previous poll. Ipsos MORI too recorded a notable movement in that direction, and its estimate of 60% support for Remain equalled its previous all-time high.

However, these movements have not been typical of the results of recent polling. Most have detected no more than a movement of a point or two – in either direction – movements that are no more than the kind of change that can occur in a poll simply by chance. This includes four polls that were either conducted at the same time as ORB’s poll or more recently.  Meanwhile, although it is the oldest of the polls listed in the table, there has been one poll, from TNS, whose figures represented a sharp swing in favour of Leave.

As a result, if we take this group of latest readings as a whole, on average they have registered nothing more than the smallest of swings towards Remain – less than a percentage point. Maybe there has been a small swing to Remain during the course of the last month, but in truth we can say no more than that. There is certainly insufficient evidence to justify any claim that there has been a decisive shift that means that a referendum race that has long looked rather close has now become significantly less so.

Mind you, it is quite clear why someone might form the impression that the race is less tight than it was. Collectively the latest polls in our table are certainly better for Remain than for Leave. Only one actually puts Leave ahead, whereas six reckon Remain hold the advantage. But we should also note that all but one of the polls that put Remain ahead were conducted by phone. As we noted earlier this week, it has long been the case that polls conducted by phone have painted a more optimistic picture for Remain. What has changed is that phone polls of referendum vote intention are now much more numerous than they were

In the early phase of the referendum campaign, that is, up to the conclusion of the renegotiation of the UK’s terms of EU membership in mid-February, phone polls of referendum vote intentions were few and far between – only eight of the 58 polls published during this period were conducted by phone. In contrast, during the last two months more than one in three polls have been undertaken by phone, while our table above contains an equal proportion of both. This change in the balance of phone and internet polls has ensured that there are now more polls reporting that Remain are in the lead, thereby creating the impression that the mood has swung in favour of Remain when in practice little or nothing has changed at all.

But what of the claim that there has been a particularly marked swing in favour of Remain amongst Conservative supporters? All but one of the polls in our table tell us how those who voted for the Conservatives twelve months ago propose to vote in the referendum. In April they found on average that 45% of those who gave David Cameron his unexpected victory in May 2015 proposed to vote for Remain, while rather more (55%) said they would vote to Leave. Those numbers have shifted – but not by much. Now on average 48% of Conservative supporters say they will vote to Remain while 52% would prefer to Leave. (In contrast, the figures for Labour supporters have remained unchanged at 69% for Remain and 31% for Leave.) If the Prime Minister has made any progress amongst those who backed him a year ago at all, it has been no more than minimal. The coalition of people who delivered him an overall majority continues to be seriously fractured in this referendum.

Equally, the collective evidence of the polls suggests that there is little sign of a decisive movement in favour of Remain amongst the over 65s, who to date have proven relatively resistant to the idea of staying in the EU. Last month the polls on average reckoned that 40% of them would vote to Remain while 60% would opt to Leave. The equivalent gap in those same polls is now a little narrower – 43% for Remain and 57% for Leave – but not much. Meanwhile, the slight movement to Remain amongst this group is far from unique.  Support for staying in the EU amongst 18 to 24 year olds has edged up in those same polls from 70% in April (with 30% backing Leave) to 75% (and thus 25% supporting Leave). Consequently, the age gap in referendum voting intentions continues to look as sharp as ever.

In truth, these figures should not come as much as a surprise. For, despite the intense efforts made in recent weeks to persuade voters that a vote to Leave would have seriously disadvantageous economic consequences, it appears that there has been little change in the proportion of voters that think would indeed be the case. YouGov’s most recent poll does find that while 23% do think that Britain would be economically better off if we left the EU, as many as 34% think we would be worse off. However, those numbers are virtually identical to those YouGov obtained in April, when 22% reckoned we would be better off if we left and 33% felt we would be worse off. Indeed these figures are not dissimilar to those that YouGov have obtained since the beginning of the year.

Even ORB have reported much the same finding. A month ago it found that 48% believed the Remain campaign’s arguments were the more convincing when it came to creating a ‘stronger economy’, while only 34% reckoned the Leave side’s claims were more likely to achieve that objective. While the proportion who find the Remain campaign’s arguments on this issue the more convincing has increased to 53%, the proportion who find the Leave side’s position the more persuasive has also gone up, to 37%. As a result, the Remain’s side relative advantage on this issue is little changed.

All in all, then, there is little evidence that ‘Project Fear’ has had any immediate success in persuading voters of the alleged economic risks that would come with a decision to leave the EU. Equally, there is little sign that it has secured a decisive swing in favour of Remain either amongst voters in general or amongst key groups in particular. But maybe that is to judge the project too harshly. What certainly has not happened in the last four weeks is any kind of swing to Leave, even though many voters remain deeply concerned about the level of immigration that they feel comes with EU membership. By ensuring that the focus of media attention in the last four weeks has been on the economy, where voters were already relatively sympathetic to the Remain side’s case, rather than on immigration, where they are decidedly unsympathetic, the UK government’s efforts may at least have helped avoid any erosion of Remain support. If that means Remain are still at least narrowly ahead, the UK government may feel that it is a job well done. We will only find out whether it has been enough to ensure that there is a majority vote for Remain when the ballot boxes are opened four weeks from now.

The economic debate The EU Referendum