Today the UK leaves the EU, three and a half years after the original vote to do so in the 2016 EU referendum. The political difficulties in the way of implementing Brexit were finally cleared by the outcome of the general election in December, which gave the Conservatives – who were committed to the UK leaving the EU on the basis of the revised withdrawal deal that Boris Johnson secured in October – an overall parliamentary majority of 80.

Two questions inevitably arise. The first is where does the public stand on the merits or otherwise of the decision to leave? Did the Conservatives’ success in the general election affirm the result of the 2016 referendum in which a majority (52%) voted to Leave? The second is what kind of future relationship with the EU do voters – on both sides of the argument – hope will emerge from the talks on that relationship that will now be instigated between the UK and the EU?

Polling of how people say they would vote in another referendum still suggests – as it has done throughout the last two years – that the outcome of a referendum on Brexit held now would be different from the one that emerged from the ballot boxes in June 2016. Our poll of polls, based on the six most recent polls of how people would vote in another referendum, on average currently puts Remain on 53%, Leave on 47%.

This is not because polls suggest that there has been any significant change of mind among those who voted Leave. Rather, as shown by our table – which is based on the last six polls of EU referendum vote intention to be conducted before the general election on December 12 – it is primarily because those who did not vote three years ago (some of whom were too young to do so) are around twice as likely to say that they would vote Remain as to state that they would vote Leave. The pattern, whereby over 85% of both Remain and Leave voters say that they would vote the same way but those who did not vote are more inclined to prefer Remain, has repeatedly been in evidence throughout the last year. 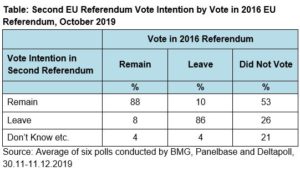 As we have noted before, although not everyone cast a ballot in the 2019 election voted for a party whose views on Brexit reflected their vote choice in 2016, the overall outcome of the election in terms of votes – as opposed to seats – is also consistent with the picture of a country that is still close to being divided down the middle on Brexit, but with perhaps slightly more in favour of Remain than backing Leave. While 47% of voters in Great Britain voted for parties that were in favour of leaving, 52% backed parties that felt that Brexit should not proceed without another ballot being held first. The Conservatives’ electoral success primarily reflected the fact that Leave voters largely all backed the same horse, whereas the votes of Remain supporters were divided across a number of parties. It was not a clear indication of any marked swing in favour of exiting the EU.

Still, we might ask ourselves whether, now that Brexit has been accomplished, many Remain voters will accommodate themselves to the new situation. So far only one poll of how people would vote in another EU referendum has been published since the general election. That, from BMG Research, put support for Remain at 52% and Leave on 48% (after excluding those who said, ‘Don’t Know’. That does represent a two-point drop in support for Remain as compared with the average of five previous polls that company conducted during the election campaign, but it is too small a drop for us to be rule out the possibility that the change is simply the consequence of the random variation to which all polls are subject.

That caution is reinforced by the results of the first post-election reading from YouGov of its long-standing question on whether in hindsight the decision to leave the EU was right or wrong. That found that while 40% say that it was right, 47% state that it was wrong. These figures are very similar those of 41% and 48% respectively that were reported on average by YouGov in their three previous readings, all taken at the outset of the election campaign.

But irrespective of where voters might stand now on the principle of leaving the EU, what kind of future relationship would they like the UK to have with the EU? In a contribution to a new publication by the UK in a Changing Europe programme on the post-Brexit challenges for the UK to be released next week, we report some initial findings of recent polling on this subject that NatCen has undertaken, including as part of The Future of Britain project. (More details of this research will be released in the coming weeks.)

Two points emerge. First, it is not clear that voters necessarily want the UK to depart from the regulatory rules that are currently enforced by the EU – and perhaps especially so when those rules give them rights as consumers.  For example, across four surveys undertaken during the last three years – most recently in September 2019 – we have repeatedly found that over 70% are in favour of requiring ‘mobile phone companies to follow EU regulations that limit what they can charge for calls made abroad’. Meanwhile, the proportion in favour of requiring ‘British-owned airlines to follow EU rules that require them to pay compensation to passengers who have been seriously delayed’, already at two-thirds in the autumn of 2016, was nearly four-fifths (78%) in our September survey.

Second, while concern about immigration has declined, there is still widespread reluctance by voters to accept freedom of movement between the UK and the EU. In the autumn of 2016, not long after the EU referendum, nearly three-quarters (74%) said they were in favour of ‘requiring people from the EU who want to come to live here to apply to do so in the same way as people from outside the EU’. In our most recent reading, taken during the general election campaign, that figure had fallen to just under three-fifths (58%). However, that still represents a clear majority – and even among those who voted Remain supporters of ending freedom of movement outnumber opponents.

At the moment, the UK government is seemingly intent not only on ending freedom of movement, but also on seeking the freedom for the UK to diverge significantly from the regulatory standards that underpin the EU single market. However, it may be the case among voters at least that ending freedom of movement is regarded as the more important prize.

The Brexit Vote: Right or Wrong? What should Brexit mean?