Public Reactions to The First Year of Full Brexit

Brexit has created a trio of notable anniversary dates – June 23rd when the referendum was held, the end of December, when (just over a year ago) the UK left the EU single market and customs union, and today, which is the second anniversary of the UK’s exit from the political institutions. So, it is a timely moment to examine where public attitudes towards Brexit now stand, aided by those polls that have addressed the issue in the last couple of months.

The subject has, of course, largely gone off the political agenda, with perhaps the exception of last autumn when there was debate about how far the shortage of lorry drivers, petrol, and food on the supermarket shelves was occasioned by Brexit. Though the government regularly argues that Brexit has been beneficial, and have now proposed making it easier to repeal EU law, the opposition parties (with the exception of the SNP) have largely preferred not to take up the subject.

Given this political quietude it is sometimes suggested that Brexit is no longer a divisive issue among the public and that, in particular, many of those who backed Remain have now accommodated themselves to the outcome. Yet this is far from the truth. Voters continue to be evenly divided on whether they wish to be inside or outside the EU, while support for being outside has actually eased somewhat during the last twelve months – thanks to a movement among both those who voted Remain and those who backed Leave in 2016.

This story is apparent from our post-Brexit poll of polls. As we noted when we first introduced it at the beginning of November, support for being ‘In’ or ‘Out’ of the EU has fluctuated since the UK left two years ago. After the polls largely found a majority opposed to Brexit during most of 2020, the balance of opinion swung in favour of being outside the EU following the exit from the single market – only then to move back again during the second half of last year. At the moment, our poll of polls is registering ‘In EU’ 52%, ‘Out EU’ 48%. 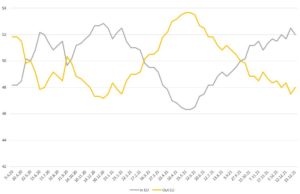 Much the same trend over the last year is discernible from YouGov’s question that asks people whether, ‘in hindsight’, the UK was right or wrong to leave the EU. Between February and June last year, on average those who said that the decision was wrong (45%) only marginally outnumbered those who said it was right (43%). But in the three months between July and September, the gap had widened to five points (46% wrong, 41% right), while since October it has stood at ten points (49% wrong, 39% right). That is as large a consistent lead for ‘wrong’ that YouGov has registered since the company started asking the question in August 2016.

Some of the swing away from Brexit has occurred among 2016 Remain voters. Last March and April, the polls were on average finding that only 69% of them would vote to rejoin the EU – giving some apparent credence to the claim that Remain voters were beginning to accept Brexit. However, in polls since mid-November that figure has increased to 76%. Meanwhile, although as many as 82% of 2016 Remain voters were saying last spring that Brexit was wrong, in the last two months that figure has risen to as much as 88%. Remain voters are in fact now rather less likely to accept Brexit than they were a year ago.

Some of those who backed Leave in 2016 have, though, also changed their minds. In March and April last year, as many as 87% said they would vote to stay out of the EU, well above the proportion of Remain voters who would still vote the same way. But now the figure has dropped to 80%, only slightly above the level of loyalty being expressed by Remain voters. And because those who did not vote in 2016 continue to prefer being in the EU over outside the EU by around two to one (among those expressing a view) this narrowing of the loyalty gap between Remain and Leave supporters is enough to result in polls that overall put ‘In the EU’ narrowly ahead. Meanwhile, only 79% of 2016 Leave voters now say that the Brexit decision is right, compared with 85% last spring.

Some of the more detailed polling that has been done in the last couple of months helps explain the trend among Remain and Leave voters. For it indicates that pessimism among Remain voters about the consequences of Brexit has grown, while some of the optimism among Leave voters has dissipated. This point is illustrated here by a couple of examples where a recent poll has replicated a question that was also asked at the beginning of last year. 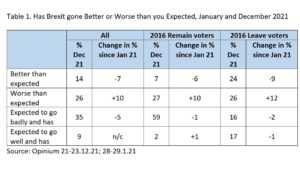 Meanwhile, Table 2 shows how voters have responded when asked about the impact of Brexit on Britain’s position on the world stage. Leave voters are now much less likely to say that Britain’s position on the world stage has got better in the wake of Brexit, and although relatively few Remain voters were of that opinion in the first place, among them too there has also been something of a fall.

Confidence in the government’s handling of Brexit has declined in parallel with the trend in perception of its consequences.  According to YouGov, the proportion who think that the government is handling Brexit badly has increased since the beginning of last year by eighteen points (to 81%) among Remain voters and by nine points (to 34%) among Leave supporters. Meanwhile, according to Deltapoll, there has been a thirteen point drop (to 59%) in the proportion of Leave voters who trust Boris Johnson to ‘get Brexit done’ and by eleven points (to 38%) among Remain voters.

It looks then that the experience of living for a year with the consequences of Brexit in full has resulted in a small but significant swing away from support from the decision that was made over five years ago. Perhaps the implementation of Brexit is simply sharing the fate of many a public policy, that is, that it proves less popular when put into practice. But it does mean that it is unwise to assume that the debate is over. Indeed, according to Savanta ComRes, nearly a half of voters (48%) think that there should be another referendum within ten years, while only 39% believe it should be delayed longer than that (if held at all). Far from being forgotten, Brexit is an issue that still has the potential to divide.