Searching in Vain? The Hunt for a Brexit Compromise

For all the apparent differences between them, both Theresa May and Jeremy Corbyn have shared one objective in common as they have developed and advocated their respective positions on Brexit. Both have been pursuing a compromise.

The Prime Minister has been explicit about this. Throughout the debate on the deal she negotiated with the EU, she has repeatedly admitted that what she brought back was a compromise between what London wanted and what Brussels was prepared to offer, and between respecting the result of the referendum (in deference to the views of Leave voters) and protecting the nation’s economy and security (thereby addressing some of the concerns of Remain supporters).

In Jeremy Corbyn’s case, the compromise is implicit but still apparent. The Labour leader has argued that his party’s policy of accepting Brexit but seeking a customs union and a close relationship with the single market would ‘bring the country together’ because it would give both the 17.4 million who voted Leave and the 16.1 million who backed Remain at least some of what they want. So, in practice he too has been trying to appeal across the Brexit divide.

Following the rejection of the Prime Minister’s deal last week by the House of Commons, the government has been engaged in talks with MPs on all sides of the Brexit debate with a view to finding a possible compromise that would secure majority support in the Commons. Later today Mrs May will unveil the fruits of her discussions and propose a motion on her next steps that is due to be debated and voted upon next week.

Others too have also been in search of common ground in the wake of an apparent parliamentary impasse. The most notable effort has come from a group of MPs led by the Conservative MP, Nick Boles, who have suggested that the way out of the apparent deadlock would be for the UK to seek a future relationship with the EU similar to that currently enjoyed by Norway. This group have suggested they might attempt to amend the government’s motion so that  MPs could, as one possibility, pass legislation that paved the way to a softer Brexit (and ruled out leaving without a deal) even if the government remained opposed to the idea.

However, the fate of Theresa May’s deal, not only in the House of Commons last week but also in the court of public opinion, should give those engaged in this search for a compromise pause for thought. The decision by MPs to reject the deal reflected the mood of the public, amongst whom, according to YouGov, opponents of the deal outnumbered supporters by two to one. Moreover, both Remainers and Leavers were largely of one mind in rejecting the deal. On average, those who voted Remain in 2016 did so by 54% to 22%, while those who backed Leave also did so by 48% to 30%. Rather than generating a consensus, Mrs May’s deal ended up looking friendless.

Could a different compromise avoid a similar fate? During the last couple of months there have been various attempts made by the pollsters, including in polls commissioned by organisations advocating on one side or other of the Brexit debate, to test the popularity of the various options that have been suggested during the course of the debate. However, asking voters to give a verdict on maybe as many as half a dozen different options, some of which may not be familiar to them and may therefore require some explanation, is by no means an easy task.   Meanwhile the range and the detail of the options presented to respondents have inevitably varied from one poll to another, as has the way in which they have been invited to express their views.

Nevertheless, a clear theme emerges from these exercises – finding a Brexit compromise that is popular with voters and bridges the Brexit divide is at serious risk of proving a fruitless exercise.

Consider, first of all, the pattern of responses to a question fielded by Opinium, as detailed in Table 1. This focuses on the procedural steps that might be taken in the wake of the parliamentary rejection of the government’s Brexit deal  ranging from leaving without a deal at one end of the spectrum, to holding a second referendum (a ‘public vote’) in which staying in the EU was an option at the other. The figures quoted here are for the most recent reading obtained shortly after the defeat of the deal, but previous readings towards a similar question about what should happen if the Commons were to vote against the deal that was fielded from September onwards uncovered much the same results.

One key pattern emerges straight away. Remain voters and Leave supporters have very different views about what should be happening in the wake of the defeat of the deal. As many as 45% of Leave supporters said they thought the next step should be for the UK to leave without a deal. In contrast, the most popular option among Remain supporters, backed by 40%, was to hold a referendum in which remaining in the EU was an option.

Thanks to this very different pattern of preferences among Remain and Leave supporters, none of the options emerge as particularly popular overall – including what might be regarded as the more intermediate position of the government attempting to secure a better deal. That possibility was backed by just one in five. 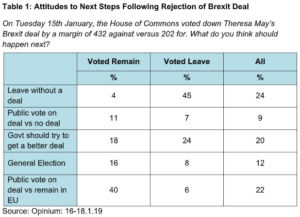 The polarisation of opinion is even more apparent in the responses to a question posed by YouGov shortly before the meaningful vote. This question was not based on the premise that the deal had been voted down, while its wording focused more on the substance of what should happen. This latter feature meant that stopping or reversing Brexit was one of the answer options – and it was backed by as many as 55% of Remain voters. As a result, support for another referendum was much lower than in Opinium’s poll. Nevertheless, the further 12% of Remain supporters who did select it meant that no less than two-thirds of Remain supporters either backed a reversal of Brexit or a procedure that might lead to the same outcome. There was little sign here of potential interest in a Brexit compromise.

At 44%, support among Leave voters for leaving without a deal, was rather less in this poll than in the poll conducted by Opinium (see Table 1). This probably reflected the fact that, with accepting Mrs May’s deal included as one of the options, nearly one in five Leave supporters were willing to indicate a preference for that possibility. Even so, just 15% of all voters chose Mrs May’s compromise, while less than one in ten of all respondents (9%) backed seeking a different deal (which might or might not have been a compromise).

Still, neither of these questions tell us much about attitudes to some of the specific substantive alternatives to Mrs May’s deal, including those that have been canvassed in the wake of its rejection. Table 3, which comes from a poll conducted at the beginning of December by BMG Research, gives us some indication of where voters stand on the spectrum of substantive possibilities, including above all the suggestion that a softer Brexit than that envisaged by the Prime Minister might prove a more popular compromise than Mrs May’s deal proved to be.

Despite the inclusion of such possibilities as having a similar relationship with the EU as Norway or remaining in the EU customs union, the apparent reluctance of many Remain voters to embrace any form of Brexit is repeated. Almost a half of Remain voters (49%) say that the UK should remain a full member of the EU.  Meanwhile, among those who supported Leave, as many as 72% either pick leaving without a deal (and trading under WTO rules) or a Canada-style free trade agreement – a proposal popular with pro-Brexit Conservative MPs but not with many on the Remain side of the argument, or, as the Table shows, with Remain voters.

As a result, only around a third of Remain voters (32%) and a quarter of Leave supporters (26%) pick the two soft Brexit ‘compromise’ options of either having a similar relationship with the EU as Norway, or (unlike Norway) being part of the customs union.  These two options also have a degree of popularity among those who did not vote in June 2016, but even so, they still only command the support of around one in three of all respondents. In contrast, as many as 45% back the Leave-inspired positions of either leaving without a deal or trading under WTO rules – while, once again, no single option has widespread public support. 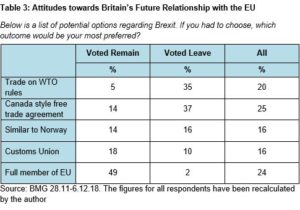 The relative lack of support for some of the softer Brexit options that have been proposed as a compromise has been confirmed when voters have been presented with a much simpler choice of leaving without a deal, staying in the EU, or pursuing one or other ‘compromise’ option. Each time the soft Brexit option has been the third most popular choice.

These results are, in truth, remarkably redolent of what happened when voters were asked to choose between Mrs May’s deal and the two more straightforward options or leaving forthwith or remaining – and indeed too when they were asked in a similar vein about the Chequers agreement.

Still, it might be felt that looking at how many people pick a compromise option as their first choice underestimates the potential ability of any such solution to bring Remain and Leave voters together. It might be thought better to look at what happens when voters are simply asked whether they support or oppose each option in turn. Although a compromise option may not be many people’s first choice, perhaps many might at least find it acceptable.

Two recent polls have asked people about some of the possible options in that way. However, they provide little support for idea that any of them is likely to be capable of crossing the Brexit divide.

Earlier this month BMG asked voters whether they supported a number of options, including – as a stop-gap measure at least – a Norway-style relationship. This proved relatively popular among Remain voters, 60% of whom said they supported the idea, with just 23% opposed. However, Leave supporters were on balance strongly opposed to the idea, with just 28% in favour and 55% opposed.

We will see in the next week or so, whether anyone has found a compromise that can command the support of a majority of MPs, including perhaps an amended version of Mrs May’s deal. But anyone who hopes that such a compromise might serve to heal the divisions between Remainers and Leavers in the Brexit debate would be unwise to set their expectations too high. Voters’ reactions to previous attempts to find a compromise suggests that any such proposal is at risk of being rejected by both sides in the Brexit debate – and on the evidence so far it appears that the same fate could well befall any of the softer Brexit compromises that have been canvassed to date.

Politicians are used to seeking out the ‘centre ground’ of British politics because that is where they believe (or are told) most voters are to be found. However, in the case of the Brexit debate that ground appears to be quite thinly populated.  Perhaps the piece of political folk wisdom that it would be more appropriate to bear in mind in the next few weeks is that ‘to govern is to choose’?

The Brexit process What should Brexit mean?

11 thoughts on “Searching in Vain? The Hunt for a Brexit Compromise”