We argued at the beginning of the election campaign that Brexit seemed set to play a key role in shaping voters’ choices. At that point, the polls suggested that those who voted Leave were for the most part saying they intended to vote for the Conservatives or the Brexit Party, while those who voted Remain were inclined to support one of the parties willing to support a second EU referendum.

Since the beginning of the campaign, however, support for both the Conservatives and Labour – both of whom have been more likely to draw support from both sides of the Brexit divide than some of their rivals – has increased by five points on average, while that for both the Liberal Democrats and the Brexit Party has fallen away. Given that the movement has been towards parties with a less distinctive electorate on Brexit, we might wonder whether how people intend to vote is less reflective of their views about Brexit than it was at the beginning of the election. But is that really the case? 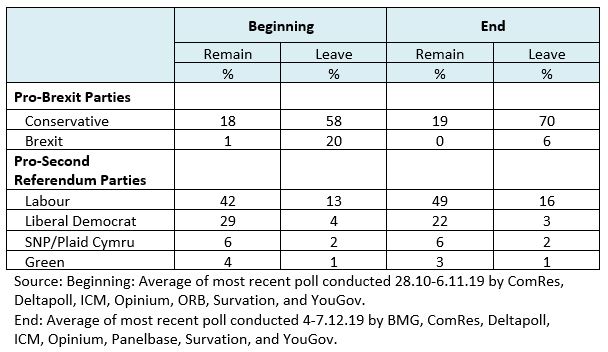 A number of important patterns emerge. First, almost all of the progress the Conservatives have made during the course of the campaign has occurred among those who voted Leave. Among that group support for the party has increased by 58% to 70%. In contrast the party’s support has barely changed at all among those who voted Remain.

Indeed support for the Conservatives among Leave voters is ten points up on the position in 2017, while that among Remain voters is four points lower.

Meanwhile, the picture for Labour is almost the exact opposite. True, the party has made a little progress among Leave voters – up from 13% at the beginning the campaign to 16% now. However, its advance among those who voted Remain is much stronger – an increase from 42% to 49%.

That still leaves the party at a lower level of popularity than it enjoyed among Remain voters in 2017, but at four points the drop is smaller than the ten-point loss of support that the party is still suffering among Leave voters.

So, despite the fact that they began the campaign with some support from both Remain and Leave voters, both the Conservatives and Labour have largely only managed to increase their support among Leave and Remain voters respectively.

That of course means that the losers in the election have been the two parties whose support at the beginning of the campaign consisted almost entirely of those on one side or the other of the Brexit divide.  Support for the Liberal Democrats has fallen by seven points among those who voted Remain, while the Brexit Party has seen its support fall from 20% to 6% among those who voted Leave.

However, taken together these patterns mean that the alignment between how people propose to vote and how they voted in the 2016 EU referendum is still almost as strong as it was at the beginning of the campaign. The proportion of Leave voters who are backing either the Conservatives or the Brexit Party has only slipped slightly from 78% to 76%, while the proportion of Remain supporters backing one of the parties in favour of a second referendum is, at 80%, barely any different from the position at the beginning of the campaign (81%). Meanwhile, both figures are still up on the equivalent statistics for the last election.

At the same time, we should note the extent to which Brexit has shaped the dynamics of vote choice during the election. Most of the movement has consisted of voters switching between pro-Brexit parties and switching between pro-second referendum ones. That perhaps is the clearest testament that Brexit is indeed playing a key role in shaping voters’ choices at this election.

18 thoughts on “Still A Brexit Election?”