The Brexit Divide: Forgotten, Not Disappeared

The coronavirus pandemic has come to dominate the political agenda. As a result, after three years of rarely being out of the headlines, Brexit is now barely mentioned, even though much remains to be settled so far as the UK’s future relationship with the EU is concerned. Meanwhile, far from being an issue on which voters are divided, there is agreement across the political spectrum that some way needs to be found to manage and perhaps eventually ‘defeat’ the virus – the only point of dispute is how this might best be achieved. This unity of purpose has helped engender a ‘rally to the flag’ effect that has served to boost the personal popularity of the Prime Minister and underpinned relatively high levels of satisfaction with how the government has been handling the crisis.

Given this backdrop, one can understand why it might be thought that the divisions of the Brexit debate have been left behind and that the country’s electoral landscape has been fundamentally redrawn. However, a look at recent polling suggests this is far from being the case.

In the table below we show separately for those who voted Remain in 2016 and those who backed Leave the average level of support for the parties as recorded by polls conducted in April. It also compares the current position with how people voted in last year’s general election, as measured by polls conducted by Lord Ashcroft and YouGov. 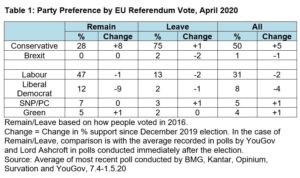 As was the case in the general election, the Conservatives dominate the political preferences of Leave voters, three quarters of whom currently say they would vote for the party. In contrast, Labour is still by far the most popular party among Remain supporters, nearly half of whom say they would vote for the party – again, little different from what happened last December. The Brexit divide is still very clearly in evidence so far as the pattern of party support is concerned.

True, what is noticeable is that support for the Conservatives has advanced somewhat among Remain voters, while staying relatively static among Leave supporters. At 28% the average level of support for the party is eight points up on the figure recorded at the election. To that extent at least, there is some evidence that the reaction to the coronavirus pandemic has served to reduce the width of the Brexit divide, and that the Conservatives’ fortunes have been restored somewhat among a group where they declined markedly between 2015 and 2019. From the table, it looks as though much of this progress by the Conservatives among Remain supporters has come at the expense of the Liberal Democrats, who were the most popular choice in December for those Remain voters who defected from the Conservatives between 2017 and 2019 and who perhaps have now returned to the fold. However, an examination of the detailed poll figures on how voters have switched since December suggests that is only part of the story. In practice, Liberal Democrat voters appear to have switched to the Conservatives and Labour in roughly equal numbers, but the Conservatives have been the net beneficiary of switches between themselves and Labour.

This picture of a continuing and only slightly narrowed Brexit divide is also in evidence if we look at voters’ evaluations of the Prime Minister as measured by Opinium. As we might anticipate, during the election Mr Johnson was much more popular among those who voted Leave than he was among those who supported Remain. On average during the campaign, as many as 64% of Leave voters told Opinium that they were satisfied with the way that Mr Johnson was handling his job as Prime Minister, while just 20% were dissatisfied. In contrast, the position among Remain voters was almost the exact opposite, with 20% expressing satisfaction and 66% dissatisfaction.

The Prime Minister is now more popular than he was during the election among both groups – just as we would anticipate from a ‘rally to the flag’ effect that cuts across existing political divides. However, Mr Johnson is still much more popular among Leave voters than he is among their Remain counterparts. On average in the last month’s Opinium polls, no less than 77% of Leave voters have said that they are satisfied with how Mr Johnson is handling his job, while just 12% are dissatisfied. In contrast, Remain supporters are more likely to be dissatisfied with the Prime Minister (47%) than satisfied (37%).

What is true is that the gap between the two groups has narrowed a little – the proportion of Remain voters who are satisfied with the way Mr Johnson is handling his job has increased by 17 points, while among Leave voters the increase has been a more modest 13 points. But even though voters may have rallied to the flag during the pandemic, that does not mean that the political divide created by Brexit has disappeared – and on current form it is still likely to be with us when the immediate public health crisis is over.

6 thoughts on “The Brexit Divide: Forgotten, Not Disappeared”