Two Years On: A Decline in the Popularity of Brexit

Posted on 5 January 2023 by John Curtice

It is now two years since the UK left the EU single market and customs union following the conclusion of a Trade and Co-operation Agreement (TCA) between the UK and the EU at the very end of 2020. That agreement was the final stage of a Brexit process instigated by the majority vote to Leave in the June 2016 referendum.

However, there is no guarantee that the popularity of a policy will survive its implementation. And it appears that Brexit has not survived the test of time at all well so far as voters’ evaluations of its success are concerned.

Figure 1 displays for the last two years a rolling average of the last six polls that asked people how they would vote in another referendum on EU membership (those saying Don’t Know are excluded from the calculations). In the initial months of 2021 these polls were a mixture of those that asked people how they would vote if faced once again with the choice between remaining or leaving the EU (see here and here) and those that asked them to choose between (re-)joining or staying outside the EU (see here and here). Subsequently, the latter approach has gradually become more common and, indeed, it accounts for all polling on the subject that has been conducted since last spring. 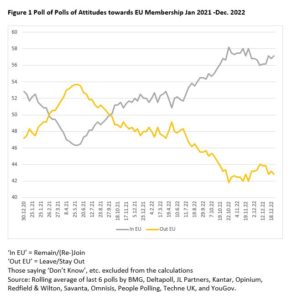 When the TCA was concluded, being inside the EU was actually slightly more popular than being outside. But in the ensuing months the balance of public opinion turned around. By the middle of 2021 support for being outside the EU reached nearly 54% on our rolling average, and, although the popularity of Brexit fell somewhat thereafter, at the end of summer 2021 it was still the more popular option. Accompanied as it was at the time by a strong performance by the Conservatives in polls of vote intentions, it appeared as though Brexit might no longer be a source of further dispute.

However, our graph reveals that this mood did not last. The autumn of 2021 witnessed much media coverage of shortages on supermarket shelves and in petrol stations, shortages that were widely blamed on a lack of lorry drivers as a result of restrictions arising from Brexit. Being inside the EU became the most popular option once more, such that by the end of the year 52% wanted to be inside the EU and 48% outside, similar to the position at the beginning of the year.

This more or less continued to be the position throughout the first half of 2022. But since then, in what has been a period of political and economic turbulence, support for being outside the EU has declined further. By the time that Liz Truss’ short tenure as Prime Minister concluded towards the end of October, not only had support for the Conservatives plummeted, but support for Brexit had reached an all-time low.  With polling on the subject now much more regular than it had been for much of the last two years, just 43% were now saying they would vote to stay out of the EU while 57% would back (re-)joining.

That is still the position now. Rather than looking like an unchallenged ‘fait accompli’, Brexit now appears to be a subject on which a significant body of voters has had second thoughts.

A similar chronology is also to be found in the answers YouGov have obtained in response to a question they have regularly asked ever since the 2016 referendum, ‘In hindsight do you think Britain was right or wrong to leave the EU?’. While throughout the last two years more people have said the decision was ‘wrong’ than ‘right’, the gap between the two narrowed in the first half of 2021, but has widened since, and especially so in the second half of 2022.

But why has support for Brexit fallen? As a first step in answering that question we need to examine how the turnover of attitudes has changed during the last two years. There are three possibilities. The first is that there has been a decline in the willingness of those who voted Remain in 2016 to accept that the UK should remain outside the EU. The second is that there has been an increase in the proportion of Leave supporters who have changed their mind. And the third is that those who did not vote in 2016 (some of whom will have been too young to do so) have swung in favour of EU membership during the last two years.

Table 1 enables us to assess which of these patterns is most in evidence. It compares the average levels of support for being in or out of the EU at the beginning and end of 2021 and at the end of 2022 separately for those who voted Remain, Leave, or did not vote. 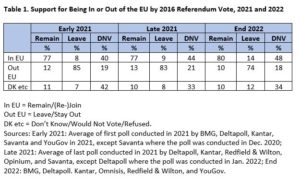 However, during the last year the proportion of Leave voters who back staying outside the EU has fallen by nine percentage points, from 83% to 74%. In contrast, there has only been a marginal increase in the proportion of Remain voters who would now vote to join the EU, while the same is also true of those who did not vote in 2016. It is now Leave voters rather than their Remain counterparts who are more likely to have changed their minds about Brexit – and it is the decline in support for Brexit among those who originally voted for it that primarily explains why there has been a swing against the idea during the last twelve months.

The key to understanding the changed mood on Brexit would seem therefore to lie primarily in an examination of how Leave voters’ evaluations of the success or otherwise of Brexit have changed during the last year or so. It is to that task that our next blog will turn.

The Brexit Vote: Right or Wrong?

10 thoughts on “Two Years On: A Decline in the Popularity of Brexit”