Two Years On: Why Have Some Leave Voters Lost Faith in Brexit?

Posted on 6 January 2023 by John Curtice

In our previous blog on attitudes towards Brexit since the UK left the EU single market, we noted that after oscillating up and down in 2021, the last twelve months witnessed a marked decline in support for being outside the EU. On average, the polls now suggest that 57% would vote to rejoin the EU, while only 43% would support staying out. We also went on to show that much of the decline in the popularity of Brexit is accounted for by a swing away from the idea among those who in 2016 voted to leave the EU.

In this blog we try to account for this swing by examining how Leave voters’ evaluations of Brexit have evolved during the last twelve months or so. We can do so thanks to three extensive pieces of polling that recently repeated questions about the consequences of Brexit that they had previously asked in late 2021 or early 2022.

The first of these is polling by Opinium, which at the beginning of December administered questions that the company first asked in September 2021. The second is work undertaken by Savanta, which this December repeated questions that had had been asked a year previously. The third was undertaken by Redfield & Wilton for The UK in a Changing Europe, polling on which we have written previously, and which addressed the issue last February and again in December.

Table 1 summarises the findings obtained by Opinium. They suggest that even in September 2021 relatively few Leave voters thought that Brexit was having a ‘good’ impact on any of the issues covered by the poll; on none of them did more than a third express that view. But in each case the proportion saying ‘good’ is now lower, while those saying ‘bad’ is higher. That suggests that there has been an across-the-board reduction in positive evaluations of Brexit among Leave voters. However, the table also shows that the most marked change of outlook is in respect of the economy. In September 2021, those saying the impact of Brexit has been ‘good’ is down by 18 points, while the proportion saying it has been ‘bad’ is up by 14 points.

In Table 2 we examine the polling undertaken by Savanta at the end of both 2021 and 2022. As in the case of Opinium, the earlier poll did not suggest that there was a widespread feeling among Leave voters that Brexit was making things better – including on the issue of immigration which was not covered by Opinium but which played a prominent role in the 2016 referendum campaign. But in this instance on many items the balance of opinion is little different now from what it was twelve months ago, and indeed in the case of relations with our European neighbours, the proportion who think that things have worsened (41%) is 16 points down on what it was in 2021 (57%). 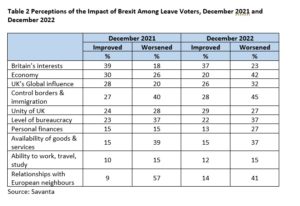 However, on some items the balance of opinion in Savanta’s polling is more negative now. Moreover, here too, it is on the economy where opinion has changed the most. The proportion of Leave voters who think that Brexit has worsened the economy is up by 16 points (from 26% to 42%), while the proportion who think it has improved the economy is down by ten points (from 30% to 20%). Meanwhile, perceptions of the impact of Britain’s global influence, another subject not covered by Opinium, have also become notably more pessimistic.

Finally, in Table 3 we show how Leave voters have responded when Redfield & Wilton have asked whether Brexit has made things better or worse than they would have been otherwise. It shows that on two topics that the Opinium and Savanta polls did not cover – the handling of the coronavirus pandemic and the extent to which Brexit helped Britain gain more control over its own affairs – there was a widespread belief early last year that Brexit had resulted in a better outcome than would have happened otherwise. Moreover, in the case of the pandemic at least, including the vaccine rollout, that outlook is still largely undiminished, and it clearly represents one area where the government has enjoyed long-term success in its advocacy of the benefits of Brexit. 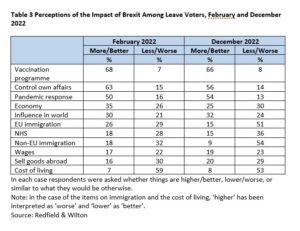 Indeed, much like that from Savanta, much of Redfield & Wilton’s polling also suggests that on many items the balance of evaluations has not changed markedly. One instance, however, where that is not the case is in respect of immigration – Redfield & Wilton’s polling shows a substantial increase in the proportion who think that both EU and non-EU immigration is higher now than it would have been if the UK were part of the EU. Otherwise, we should note that here too perceptions of the impact of Brexit on the economy have become more negative, while there has also been some drop in the proportion who believe that Britain has more control over its own affairs.

There is then, one message that emerges with considerable consistency across the three sets of polls. Leave voters have become notably less positive about the impact of Brexit on the economy. Of course, this trend has occurred in tandem with a worsening economic outlook and a decline in economic optimism. It may well be that the responses given by Leave voters about the economic impact of Brexit reflect that wider darkening of the economic outlook (and in their perception of the economic competence of the government that implemented Brexit – see also here) rather than a carefully honed evaluation of the impact of leaving the EU. However, even if this is the case it indicates how difficult it is in current circumstances for Brexiteers to persuade Leave voters, let alone anyone else, that Brexit is proving advantageous economically.

Still, our analysis so far simply suggests that more adverse economic evaluations of the economics of Brexit looks like a possible key explanation of why support for Brexit has fallen among Leave voters. If we are to say more than that we also need to demonstrate that those Leave voters who have a negative perception of the economic consequences of Brexit are less likely than those who do not to say that they would vote to stay out of the EU.

Further analysis that we are able to undertake of Redfield & Wilton’s most recent polling suggests that is the case. As many as 37% of those 2016 Leave voters who think the UK economy is weaker as a result of Brexit now say they would vote to join the EU, compared with only 12% of those who think the economy is at least as strong as it would have been otherwise. More complex statistical analysis suggests that this difference is robust even when we take into account the possible impact of other evaluations on the probability of a Leave voter saying that the UK should stay out of the EU.

We are left with two key findings. First, there is consistent evidence in the polls that Leave voters have particularly become more negative in their evaluation of the economic consequences of Brexit over the last twelve months. Second, those who hold that view are less likely to support staying outside the EU than those who do not have such a negative evaluation. In short, it looks as though it is a loss of confidence among Leave voters in the economics of Brexit that, above all, has resulted in some of them rethinking their attitude towards being outside the EU.

Perceived consequences of leaving the EU