Posted on 4 February 2017 by Roger Scully

Like England, Wales voted narrowly last June in favour of leaving the EU. Here Roger Scully of Cardiff University presents the latest evidence on how attitudes towards Brexit have evolved there since.

The latest Welsh Political Barometer poll conducted at the beginning of January by YouGov for ITV Wales and Cardiff University provides the latest gauge of public attitudes to Brexit in Wales. When we last looked at the issue in September, a consistent finding was the existence of a substantial gap on almost all matters between Remain and Leave voters.

With that in mind, the results are presented here in three columns, showing the responses of Remain and Leave voters separately, as well as those of the overall sample.

First, we asked about the possibility of another referendum:

Would you support or oppose holding a second referendum of Britain’s membership of the European Union to confirm or reverse Britain’s decision to leave the EU?

So we see here clear majority opposition to having a second referendum. Although there is fairly strong support for the idea from those who did vote Remain, Leave voters and others are strongly opposed.

We then asked how people would vote in the event of there being another referendum on the issue:

Our latest is the third to ask about Welsh voting intentions in such a hypothetical second referendum since last June. All have shown the nation continuing to be very closely divided.

We then asked about the major priorities that the UK should set for Brexit-related negotiations, and the kind of Brexit for which the UK should be aiming. On priorities, we asked the following:

Now that Britain has voted to leave it will need to negotiate the future relationship it has with the European Union. With this in mind, which of the following comes closest to your view?

This is what we found:

Across the whole sample, the balance of opinion (on this question wording, at least) is clearly towards Britain prioritising border control over EU trade. The same was true when we asked the question last September.  But that overall picture once again masks large differences between Remain and Leave voters. As in the rest of the UK, the former mostly prioritise free trade, the latter border control.

This was an interesting finding because in December the Western Mail published results from a Beaufort face-to-face poll which appears to show a different state of affairs. The Beaufort/Western Mail question asked:

Looking at this card, please tell me which one of these is more important to you in the negotiations about Brexit (or the UK leaving the European Union)?

Respondents were then given the following options:

As the next table shows, the pattern of responses was very different:

So what do we make of this?! One response might be the standard one of some people, that “all polls are rubbish”. But universal dismissal is no more thoughtful or wise an attitude than universal credulity. A more thoughtful approach might suggest a number of possible factors behind the differences:

Back to our Barometer poll findings. We next asked a question which asked our respondents to select between several different scenarios:

Thinking about Britain’s relationship with the European Union now it has voted to leave, which of the following would you most like to see? 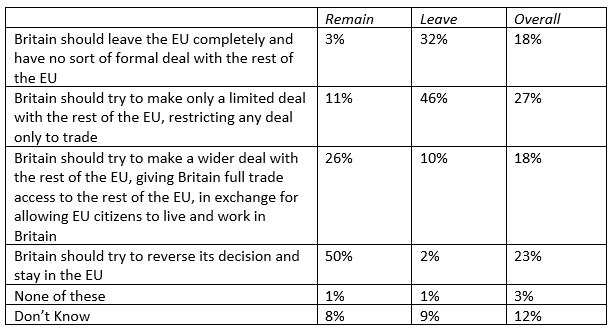 So more than three-quarters of Remain voters prefer either a ‘soft’ Brexit or no Brexit at all, while almost four-fifths of Leave voters indicate a preference for a ‘hard’ Brexit. And across the sample as a whole there is no consensus whatsoever: no option wins the support of much more than a quarter of people. Once again, the basic point is reinforced – there is no public consensus about Brexit emerging. Wales – like much of the rest of the UK – continues to be deeply divided about the issue.

Our remaining questions asked about the consequences of Brexit, both personally and for Wales as a whole, and trust in the UK and Welsh Governments to handle the issue.

First of all, the consequences of Brexit for Wales. We repeated a question asked in September about how Wales would fare relative to the rest of the UK . This was the pattern of responses:

On the personal consequences of Brexit we asked:

When the UK leaves the EU do you think you personally will be better off, worse off, or will it make no difference?

Once again, we see here stark differences between those who voted Remain and those who supported Leave. Most Remain voters are pessimistic about the personal financial consequences of Brexit. Interestingly, most Leave voters do not expect themselves to be better off as a result of the UK leaving the EU – a finding which emphasises that, for many Leave voters, the referendum was not primarily about economics. But relatively few of them expect to be worse off. The balance of opinion amongst voters as a whole is clearly tipped more towards pessimism than optimism, but on this question, as on so many others, there is no public consensus and no option comes even close to being selected by a majority.

Finally, our poll asked about levels of trust in both the UK and Welsh Governments to handle ‘the issue of Britain leaving the EU’: 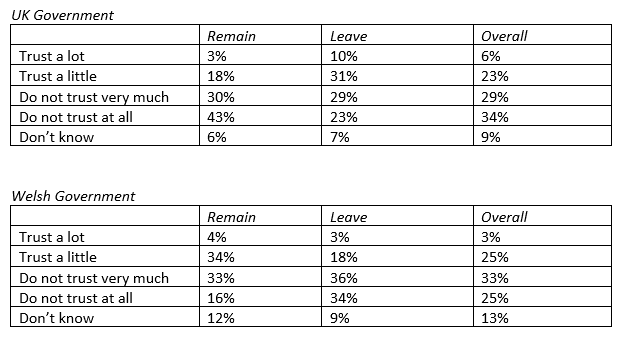 Here, we see rather poor levels of trust overall in both governments to deliver on Brexit. We also see on this question more modest differences between Remain and Leave voters than on just about all our other questions. Those differences that do exist appear to be primarily a function of party loyalties: Conservative voters, many of whom also voted Leave, unsurprisingly have greater levels of trust in the Conservative UK government, while Labour supporters, who mostly voted to Remain, trust the Welsh government much more.

Overall, what seems clear is that in the several months since the referendum, the divisions on this issue in Wales have not yet begun to heal. The views and perceptions of the Remain and Leave voters continue to be very different: there is no sign of a public consensus on Brexit emerging.

Roger Scully is Professor of Political Science in the Wales Governance Centre at Cardiff University. He is co-author of Wales Says Yes: Devolution and the 2011 Welsh Referendum, is Director of the Welsh Election Study, and blogs on electoral politics in Wales at http://blogs.cardiff.ac.uk/electionsinwales/

Perceived consequences of leaving the EU The Brexit process The Brexit Vote: Right or Wrong? What should Brexit mean?