Where Stands Public Opinion on Brexit Six Months On?

Britain’s voters did not just surprise many a commentator on June 23rd  – they also surprised themselves. In one poll conducted on referendum day itself Lord Ashcroft found that 70% reckoned Remain would win and only 30% that Leave would do so, while in another YouGov ascertained that 52% expected Remain to win and only 19%, Leave (the remainder didn’t know). Yet in the event, of course, rather over half of those who participated voted to Leave. In so doing they not only brought down a Prime Minster but instigated a fierce debate amongst politicians and the public about the wisdom of the decision that has been made and on what kind of future relationship with the EU the UK should now seek to secure.

So far, however, this debate seems to have done little to change voters’ minds about the merits of the decision to leave. For example, during the last six months YouGov have regularly asked people, ‘In hindsight, do you think Britain was right or wrong to vote to leave the European Union?’. Typically, almost 90% of Remain voters have said that they thought that the decision was wrong, while almost 90% of Leave supporters have said that it was right.  Given that slightly more people voted Leave in June than voted Remain, this means that on most occasions YouGov have found that, overall, slightly more people think the decision was right.

Perhaps even more importantly, there is little consistent evidence that people would vote any differently if the referendum were to be held once again. True, as Table 1 shows, a couple of readings taken immediately after the referendum suggested that many a Leave voter now regretted their decision. However, of the nine (variously worded) readings that have been taken since the beginning of July, six have put Leave (narrowly) ahead, two had the two sides tied and just one reported that Remain supporters now outnumber Leave ones. It seems that six months on from the referendum, Britain is simply just as divided over the merits of leaving the EU as it was on referendum day itself.

But what do voters want to happen now that we are seemingly destined to give notice to quit by the end of March next year? On this the evidence from the polls has been far from straightforward to interpret.

It is widely thought that the key choice with which the EU will face the UK is between retaining free access to the single market and continuing to accept freedom of movement to the UK for EU citizens, or being able to limit immigration from the EU but losing access to the single market. This supposed choice is, in a sense, a rerun of the arguments during the referendum itself, when many a Remain voter said that the (supposedly adverse) consequences of leaving the EU were the central issue in the referendum, while many Leave voters felt that the (supposedly adverse) consequences of staying in the EU for the UK’s ability to control immigration was the key issue at stake.

Indeed, the polls have consistently found that Remain voters are more inclined to prioritise access to the single market, while Leave voters consider it more important to control immigration. However, that does not mean the polls have always found opinion to be evenly balanced on the issue. Rather, as Table 2 shows, some have found substantial majorities saying it is more important for the UK to retain access to the single market, while others have reported the very opposite. In some instances, even the same company, employing much the same method, has obtained very different results. 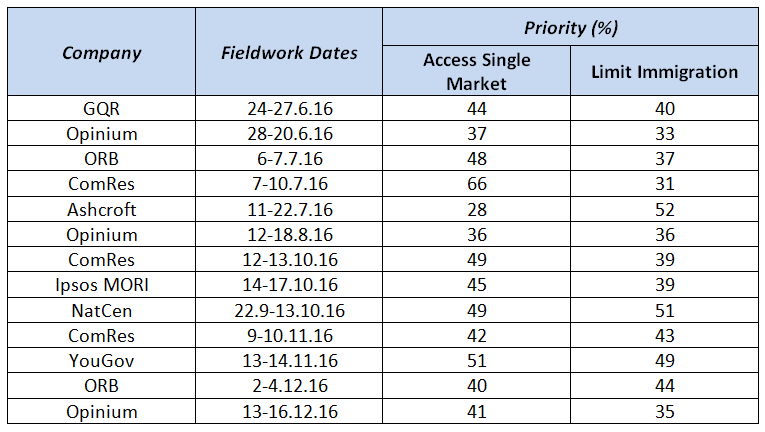 Much of the explanation for this variation would seem to lie in differences of wording. (There is, for example, no obvious trend over time.) Every single reading reported in Table 2 has in fact been obtained using a different question wording. Even in the case of those companies that have addressed the issue more than once, not a single one of them has repeated the same wording.

We can gain some idea of just why wording might have made so much difference to the pattern of responses by comparing the question asked by the poll that secured the lowest proportion of people prioritising access to the single market (conducted by Lord Ashcroft in July) with that posed by the poll that secured the highest proportion (conducted by ComRes, also in July). Lord Ashcroft asked:

On a 0-10 scale where 0 means securing access to the EU single market at all costs and 10 means being able to control immigration at all costs, where do you think the balance should lie?

While ComRes’ question read as follows:

Which of the following do you think should be the priority for the British Government when negotiating the UK’s withdrawal from the EU?

It does not require a great deal of imagination to anticipate that ‘being able to control immigration’ sounds more attractive to most voters than ‘restricting the freedom of movement’, as does ‘maintaining’ access to the single market to ‘have free trade’ than ‘securing’ access ‘at all costs’.

Such apparent confusion and sensitivity to wording in these polls inevitably makes it difficult to assess quite where public opinion stands on the issue. It certainly suggests that much will depend on how it becomes framed in voters’ minds should the UK indeed find itself faced with a stark choice. But leaving this aside, most likely public opinion is just as divided on the subject as it is on the merits of the Brexit decision in the first place. Certainly if we make the heroic assumption that the best guide to the underlying balance of opinion is likely to be found by taking the average of the very divergent readings in Table 2, we find that 44% apparently prioritise keeping access to the single market and 41% being able to limit immigration.

But there is, in truth, another important reason why polling on this subject is apparently so difficult. Voters’ attitudes are not structured in the same way as the views of those who lead the EU, for whom free trade and free movement go together like a horse and carriage. This was demonstrated in an analysis paper we published last month that reported the findings of questions that were included in the latest wave of NatCen’s random probability panel. Rather than asking people to choose which mattered to them more, this survey simply invited respondents to say whether they were ‘in favour’ or ‘against’ various possible components of a deal between the UK and the EU.

No less than 90% said they were in favour of ‘Allowing companies based in the EU to sell goods and services freely in Britain in return for allowing British companies to sell goods and services freely in the EU’, while at the same time, 74% stated that they were in favour of ‘Requiring people from the EU who want to come to live here to apply to do so in the same way as people from outside the EU’. Indeed, more generally, majorities – including majorities of both Remain and Leave voters – backed a range of options that are often thought to comprise part of a ‘soft’ Brexit (such as bank passporting) while at the same time majorities also supported options often thought to constitute part of a ‘hard’ Brexit (such as leaving the EU customs union).

Doubtless to many in the EU this apparent wish on the part of the British public to want to retain free trade while no longer granting freedom of movement will seem like a desire by voters to have their cake and eat it. An alternative view, however, is that many people in the UK, including some of those who voted to Remain, reject the EU’s recipe for baking the cake in the first place. For them freedom of movement as currently implemented in the EU is not seen as a necessary concomitant to free trade. But none of this is likely to make it any easier for the UK government to secure a deal that is welcomed by a majority of voters in a nation that looks just as divided now as it was half a year ago.

This is an expanded and updated version of a chapter in ‘Brexit: Six Months on’ published by the UK in a Changing Europe initiative.

The EU Referendum What should Brexit mean?