Where Stands Support for Brexit Now?

Posted on 1 November 2021 by John Curtice

Regular users of this site will be aware that our home page has long provided a link to a ‘EURef2 Poll of Polls’ – and they may also have noticed that this facility has not been updated since the UK formally left the EU on 31 January last year. At that point, we decided to wait and see what would be available in the way of polling on whether the UK should be inside or outside the EU. Then, of course, the pandemic took hold and media interest in Brexit – and thus polling on the subject too – largely went on the back burner.

However, there has been a modest trickle of polls since the implementation of Brexit – typically two or three a month though with rather more in January (following the conclusion of the trade deal with the EU) and in June (fifth anniversary of Brexit) this year – mostly from Deltapoll and Kantar (and to a lesser extent YouGov). The question respondents have been asked has both varied over time and between pollsters. Most companies have gradually shifted from asking whether the UK should ‘remain’ or ‘leave’ the EU (see here and here) to some version of whether the UK should ‘(re-)join’ or ‘stay out’ of the EU (see here and here), though Deltapoll still ask their respondents the question that appeared on the 2016 referendum ballot paper.  This change matters, because as we have previously shown, people are somewhat less likely to say that they would vote to ‘(re-)join’ the EU than they are to say that they would vote to ‘Remain’ – enough to make a difference of five or six points or so to the overall tally – thereby making the construction of any ‘poll of polls’ more problematic.

That said, the last few weeks have seen Brexit return to the headlines, partly because the pandemic is no longer so dominant, but also because of allegations that Brexit is implicated in the labour market and consumer goods shortages that have recently emerged. Apart from the arguments about the particular impact of Brexit in Northern Ireland, this has been the first time since the UK left the EU that there has been much public debate about how Brexit is turning out in practice. That suggests that perhaps now would be a timely moment to inaugurate a new post-Brexit Poll of Polls.

This new facility represents an average of the last six polls that have asked any kind of binary choice between the UK being inside the EU or outside the EU. Given that the different question wordings can matter, we not only provide details of the individual polls that contribute to the latest calculation but also an indication of the kind of question each one asked. Readers should always take note in particular of the balance between ‘(re-)join’ vs. ‘stay out’ type questions and ‘remain’ vs. ‘leave’ ones. It should also be appreciated that, given the frequency with which polls on the subject are currently being published, the poll of polls may well be based on polls conducted over as long as a two-month period, and thus it may well take a while before it reflects any changes that may have occurred in the balance of public opinion. Also note that those who say ‘Don’t Know’ are excluded from the calculations.

Still, armed with this approach, we can (tentatively) assess how the balance of opinion has – and has not – appeared to shift since Brexit was implemented at the end of January 2020. The chart below shows a running average of the last six polls since that date. Note that the origin of the graph is ‘42’ not ‘0’ and thus we have magnified visually such changes as have occurred.

The first thing that we should note is that the movement has been modest. Never has the average level of support for being out of the EU been less than 47% or more than 54%. The relative stability that characterised public opinion during the Brexit process has continued to be evident in the eighteen months since. Although Brexit has now been ‘done’, the country remains evenly divided between those who wish to be in the EU and those who want to be outside – just as it was in June 2016.

Second, however, there have been some small ‘movements’. First, it will be noted that in the months immediately after Brexit the polls registered a small majority in favour of being outside the EU – though this was a period when most of the polls asked a ‘(re-)join’ vs. ‘stay out’ type question. For the remainder of 2020, however, the polls, which now still mostly posed the choice between ‘Remain’ and ‘Leave’, largely reverted to the position that had been in evidence for much of the Brexit process, that is, one where there was a narrow majority in favour of being part of the EU. However, once the UK had concluded its trade deal with the EU at the turn of the year, a pro-Brexit majority began to emerge, a trend that was only partly the consequence of the fact that more polls were now asking whether the UK should ‘(re-)join’ or ‘stay out’. 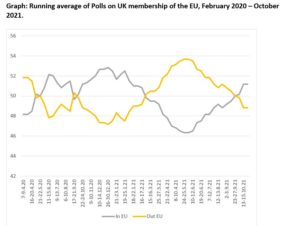 However, since June there have been signs of a shift back in the direction of being part of the EU, even though most polls have continued to ask whether we should ‘(re-)join’ or ‘stay out’ of the EU. And now – just as the various shortages have hit the headlines – our Poll of Polls currently shows 51% in favour of being part of the EU and 49% against. In truth, much of this lead is accounted for by the fact that the most recent poll from Deltapoll reported as much as 56% support for Remain, a figure that may, perhaps, prove to be something of an ‘outlier’. However, the remaining polls conducted over the last two months still suggest that supporters and opponents of EU membership currently stand at 50% apiece rather than ‘Out EU’ being clearly, if narrowly ahead.

With all the caveats to this exercise it is, perhaps, important to note that much the same trend over time is also discernible from the question that YouGov have asked on a more or less regular basis ever since the June 2016 referendum – ‘In hindsight do you think Britain was right or wrong to vote to leave the EU?’ – a question whose wording has not had to be changed in the wake of the implementation of Brexit. In the spring of 2020, the proportions saying ‘right’ (on average, 43%) and ‘wrong’ (45%) were very close to each other, but then in the second half of the year, those saying ‘wrong’ (48%) clearly outnumbered those who said ‘right’ (40%). However, the gap then narrowed again within weeks of the conclusion of the trade agreement (on average, 43% right, 45% wrong), only to have widened again in the second half of this year (41% right, 47% wrong). In short, it seems unlikely that the ups and downs in our chart above are simply the product of shifts in question wording.

Still, given that the balance of opinion was already showing signs of shifting before the media headlines about shortages, we should be wary of assuming that the swing away from being outside the EU has simply been occasioned by those headlines. Indeed, we should remember that people’s prior dispositions will affect where they lay the blame for a situation where there is no shortage of potential culprits, including not least the pandemic. Thus, for example, although when Deltapoll presented their respondents with a range of explanations for the recent fuel crisis, Brexit, at 35%, was second only to the media (42%) as one of the options that people selected, this choice was much more popular among those who voted Remain in 2016 (55%) than it was among those who voted Leave (21%). Much the same was true of similar questions the company asked about shortages in the shops and the rise in energy prices. Meanwhile, when Opinium asked what role Brexit and coronavirus played in the fuel shortage, as many as 50% of Remain voters laid the blame exclusively on Brexit, while only 12% of Leave voters did so.

That said, people’s prior views have not proven to be a perfect filter. This becomes apparent if we compare the pattern of response now to questions that have asked how well Brexit in general is going with the pattern that was in evidence when they were posed a few months ago. For example, when Opinium asked in mid-October whether Brexit was going well or badly, as many as 84% of Remain voters said that it was going badly, whereas only 37% of Leave voters took that view. However, this still represented a nine-point increase in the proportion of Leave voters who said that things were going badly, matching the eight-point increase among Remain supporters. Equally, when YouGov asked a similar question in September, 81% of Remain voters but only 29% of Leave voters said that Brexit had gone badly. Yet the latter figure still represented a 13-point increase on the proportion who had done so in June, similar to the 15-point rise among Remain voters. In short, what appears to have been a shift in wider evaluations of the success of Brexit has far from been confined to Remain supporters.

We should though also be aware that the balance of opinion on Brexit does not simply depend on the views of those who participated in the EU referendum. One feature of the polls during the Brexit process was that those who did not vote in 2016 came to be markedly more likely to say that in a second referendum they would vote Remain rather than Leave. That pattern is still apparent. True, on average in recent polls as many as 50% of this group have said that they would not vote again. But among those who do express a view, 35% state that they would vote to be in the EU, while only 15% say they would back being out of the institution. That helps explain why being in the EU is currently at least as popular as being out of it, even though at 75% the proportion of 2016 Remain voters who say they would back being in the EU is a little below the proportion of Leave voters (79%) who state that they would be supporting being out of the EU. The future of the Brexit debate in Britain will not simply rest on the reactions of those who cast their verdict five years ago.

Attitudes towards topical events The Brexit Vote: Right or Wrong?