Why Has Brexit Become Less Popular?

Posted on 7 September 2022 by John Curtice

The latest poll by Redfield & Wilton Strategies for UK in a Changing Europe suggests that, among those expressing a preference, 54% would now vote to join the EU while only 46% would back staying out. That is quite a turnaround from the position just six months ago. Then, 55% were saying they would vote to stay out and only 45% to rejoin. Of course, some of the movement may simply reflect random variation, something to which all polls are subject. But the latest figures are consistent with those of other polls during the summer, the last half dozen of which have on average also put rejoining on 54% and staying out on 46%.

What might account for the movement that has taken place in the last half year? Since last February the UK in a Changing Europe poll has been tracking what people think have been the consequences of Brexit. In the case of the economy, for example, respondents have been asked:

In your opinion, with the United Kingdom outside of the European Union is the UK’s economy now in a stronger, weaker, or similar position to it would be in otherwise?

Other topics are asked about in a similar way. 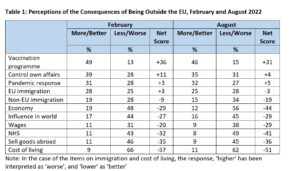 In some instances, the balance of opinion has barely changed. In the case of whether companies are now selling more or fewer  goods abroad, for example, in February 11% thought they were selling more 46% fewer, producing a ‘net score’ of -35. Now in the latest poll, the net score is, at -36, almost exactly the same. This picture is also replicated for perceptions of the handling of the pandemic and on whether Britain has more or less influence in the world.

But there are other entries in the table where perceptions of the consequences have changed noticeably. Back in February, 28% thought that immigration from outside the EU was higher as a result of Brexit, while 19% reckoned it was lower, creating (on the assumption that most voters favour lower immigration) a net score of -9. Now the net score is -19. There are also similar sized falls in the case of wages and the NHS.

However, the one subject area where the balance of opinion has moved most markedly in a negative direction is the economy. Even in February, the net score was already as low as -29. Now, in contrast, it stands at -44. Much of this drop has occurred in the last two months – back in June the net score had only edged up to -35. It may be that the increasingly pessimistic news about inflation, living standards and the risk of recession in recent weeks may have led some voters to question how successful Brexit is proving to be in delivering economic benefit. In any event, as a result of the more negative outlook, the balance of opinion on the economic consequences of Brexit is now more negative than it is for any of the other areas covered by the poll apart from the cost of living crisis.

As Table 2 shows, this shift has occurred among both Remain voters and Leave supporters. However, it has been especially sharp among those who voted Leave in 2016. In February, the balance of opinion among this group was tilted somewhat in a positive direction (albeit many said that the economy was in a similar position to what it would have been without Brexit). Now it has swung in the opposite direction.

This change of perception matters. As we demonstrated when we first analysed the February poll, the perception most strongly related to whether or not people have changed their minds about whether the UK should be inside or outside the EU is their view of the economic consequences of being outside. Remain voters who think that the economy is better as a result of Brexit are especially likely to say now that the UK should stay out of the EU, while Leave supporters who believe that the economy is now worse in the wake of Brexit are particularly likely to say they would now vote to join. So, the more negative outlook that voters have now about the economic consequences is a key explanation for the decline in support for staying out of the EU.

The same, however, cannot be said of the marked decline in the net score for immigration from outside the EU. As we noted previously, the impact of Brexit on immigration is no longer an issue that divides Remain and Leave supporters. At -19 the net score on this issue among Remain voters is little different from the -25 score among Leave supporters – a very different picture from the one that we observe in Table 2.

But if immigration is no longer serving to underpin support for staying out, what perceptions might still be helping to counteract the doubt that many Leave voters have about the economic consequences of being outside the EU? The answer appears to be that many of them still believe that Britain has more control over its own affairs outside the EU, an issue we have shown previously particularly matters to Leave voters’ continued support for being outside the EU. Although the figure is down somewhat since February, still over half of those who voted Leave in 2016 (54%) believe that Brexit gives Britain more control. Indeed, as we might anticipate from Table 1, apart from the perceived impact of Brexit on the vaccine rollout, this is the subject where Leave voters are most likely to regard Brexit as being beneficial. ‘Take back control’ still resonates it seems.

Perceived consequences of leaving the EU The Brexit Vote: Right or Wrong? The economic debate

3 thoughts on “Why Has Brexit Become Less Popular?”